Dad of three Matthew McConaughey's "main dream" was always to be a father.

Matthew McConaughey's "main dream" was always to be a father. The 'Dallas Buyers Club' star - who has Levi, 12, Vida, 10 and Livingston, seven, with his wife Camila Alves - insists that despite his glittering career, it is his family that means the most.

Speaking about the joys of fatherhood, he shared: "The one thing I knew I always wanted to be was a father. That’s been my main dream. That has always been, like, well – you made it."

Matthew and Camila have always taken their children with them for their work, against the grain of Hollywood A-listers, but it is something they would never regret.

Speaking to The Times magazine, he added: "I spoke to a few very successful people [in Hollywood] and none of them did it how we do it. Every one of them chose to let their children stay at school, with their friends, rather than bring them with them on location. Every one of them said they’d do it differently if they could go back."

Meanwhile, the 50-year-old actor says that he and Camila have a love they “never question”.

Recalling the night he met Camila, he said: "I was like, 'Wait, just wait. Be yourself. She’ll come if she’s supposed to come. And if she doesn’t, that’s okay, you’re still a good man, McConaughey. That’s when she showed up, and she moved right to left in front of my eyes across that club. It was as if she was floating.

Matthew knew Camila was the one for him the moment they met, and hasn’t looked back since. 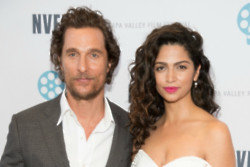 Matthew McConaughey: My wife and I have a love that we never question

Matthew McConaughey says being a dad was his 'only dream'