Aicha McKenzie is a woman with a hand built empire at her fingertips.

The founder and CEO of AMCK Dance and Modelling, this London wife and mother was also the first ever black British rhythmic gymnastics champion and is a world renowned choreographer, working with the likes of Kanye West, Rihanna and Dita Von Teese.

We spoke to Aicha before she visited Downing Street as a part of Black History Month about the occasion, choreographing dancers at the London 2012 Olympics and why she set up London’s only male only modelling agency.

So, October was Black History Month, why do you think it’s important we honour it?

Well, I think it needs to be recognised. There needs to be a time, or a moment when people say “Look at what we’ve all achieved and where we’re all going and what direction we’re going in.” Take a second to stop. So, I think it’s a really good thing.

Do you think it’s get enough attention in the UK?

No, it definitely wasn’t something I was aware even happened. When I was growing up I didn’t know there was a month and I only really started becoming aware of it when it was MTV Base and urban and hip-hop music channels giving a nod to it. That was the first time I really heard of it.

You’ve been named in numerous polls as one of the most powerful black women in Britain, what’s that like for you?

Bizarrely! Obviously, it’s a huge honour and very humbling. You just do what you do and it’s really nice that people stop and look and give me a pat on the back. That was the thing that shocked me most of all was thinking that someone’s out there and they’ve seen I’ve got my head down and I’m working hard. I’m doing it for me and my family, not to be named in polls, but by the same token it’s fantastic and makes me very proud.

Yeah, it’s really exciting. It’s part of the Power List reception and they’ve invited 50 men and 50 women to come to Downing Street, as also a get together for everyone to meet each other. That’s really important; you never get a chance to meet all these other people who’ve doing so well in their field, from anything from sport to medicine and music. So it’s really nice for everyone can get together, and then there’s the interest from the Prime Minister and it’s good for everyone to have their own special moment.

What made you make AMCK Modelling an all-male affair?

Well, I had the AMCK Dance and we’d been going for eight years and had been working with some of the biggest music artists in the world and represent some fantastic chorographers and dancers. We then wanted to expand and I thought ‘Why don’t we move into fashion’ as that’s something I also know a lot about and I’m very passionate about.

I was really conscious that I wanted to make a difference between my dance division and my modelling division. I didn’t want anyone to think ‘Now she’s called it a model agency, but it’s really just the dancers being called models’. So, one of the first things I decided to do was just concentrate on guys and find new, fresh faces in London and potentially growing them into supermodels, which is something we’ve been able to achieve in the last four years.

So there’s a separate website, separate bookers and the two companies run totally separately. I think we have the niche, we’re the only modelling agency in London that focuses on guys, there was one in the 90s which was a little bit of information.

Apart from the fact they’re all really good to look at, the obvious plus really!

Was dance a passion of yours even back in your gymnastic days?

Yeah it was. When I was training as a gymnast I used dance to enhance my performances and bring something new to gymnastics that no-one else was doing at the time. So I used to go and studio at Pineapple Dance Studios and take moves and insert them into the routines.

Then I started dancing more and everything just fell from one thing to the next. I was also simultaneously modelling, so I always had that fashion and the dance going on simultaneously in my life. Then I started choreographing and that just felt like a natural progression.

Even as a dancer, when were on shoots and shows, I was the one making sure we had breaks and kind of being a mum. I was actually the majority of the time the youngest on the job and make sure that everyone was looked after and taken care of. I think that agent-like instinct to make sure that everyone is good was just naturally in me.

Did you find it hard to break into the then male dominated world of dance choreography?

No, not really, it was just something that happened. I wrote a concept for a show just by chance as there was no one else in the office at the time, it got the job and that’s what I’m good at. Coming up with the ideas and thinking about the whole concept of the show.

I do think at some point you do succeed because of your talent, be you male or female and now there are many, many great female choreographers, especially in the pop world. Nowadays it’ not so much of an issue, back in the day there wasn’t as much of the commercial dance scene as there is now.

What’s it like when you’re working with some of the world’s biggest artists and companies?

It’s great. It means it’s the start of a new challenge and you listen to what they want, and what they want to achieve, come up with ideas together and make the whole thing happen. Kanye’s very hands on with what he wants to see in the performances.

When I was working with him, we’d change the choreography slightly for every performance. Whether they be day after day because he was saying his fans were going to watch all the shows he was on, so they need to see something different each time. So that was really exciting for an artist to care that much and to pay such attention to detail in that way. It’s great working with so many different people.

As a born and bred Londoner, what was it like to work at the London 2012 Olympics?

It was the biggest accolade so far. It was amazing! I took the whole thing on because I am a Londoner and I felt these were my Olympics and I was out there to do the best I could.

I was so proud of my city and how we rose to every single challenge. I think, not just Londoners, but nationwide, we were so proud of those games. Even the cynics were there saying “Oh my goodness, we did really well, this is great!” I always knew it would fantastic, but I didn’t know how hard it would be. It was very, very difficult but so rewarding at the same time.

How different is working on a performance like that different to working with someone like Dita Von Teese?

Well, I was going to say they’re really different, but they have their similarities. Dita has a very specific style and I help her with that style of movement. We were working on holographic film so there were technical restraints and things we had to be aware of. She’s very in control though and I’m a guide.

On the same note, the beach volleyball dancers have an air of Von Teese about them when they have their vintage outfits on and the choreography was playful in the same way. It may just be the flick of an eye which makes the whole difference between what a sequence looks like and feels like. If you watch a dancer who’s happy and smiling and doing jazz hands, they might be doing exactly the same steps, but they would have a really demure face to them. It’s a totally different feeling.

I learn a lot working with Dita too, it’s a two way street and we work really well together. She gives me stuff that I can put into other things I may do.

So, finishing off, what’s next for you then?

Now were are off to Frankfurt for the MTV European Music Awards next month, so I’ll be flying out to Germany soon to cast all the dancers, so they’ll be big auditions across Germany to find the best dancers in Europe to perform with all the artists. It’s a big show, one of the most fun ones we do and AMCK have been doing it for the last eight or nine years.

But I personally have a deeper history with it than that, I was dancing with Take That at the very first EMA’s in Berlin in 1994. So it’s brilliant that I’ve been with the show in different capacities, from dancing with the stars myself to choreographing and casting all the dancers. It’s a great show, lots of gossip from that one as you can imagine. 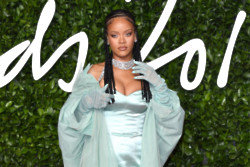