Calendar Girls the Musical is a lesson in female empowerment. This is what the feminist movement has always been about; taking charge no matter your age, shape, or bra size and knowing that you have every right to feel comfortable and proud in your own skin. If men can run around with their hairy torsos on full display, why should women be shamed for raising funds for charity and partaking in a nude calendar? Ahead of last night's (October 30) show at The Lowry Theatre in Manchester, I knew very little about the story which was to be told in this production. I had heard great things, but had never previously had the opportunity to check out the musical on stage, watch the 2003 comedy flick, or read up on the real-life stories of the original Calendar Girls from Yorkshire.

Previously adapted by Tim Firth, the stage show was given a revamp in September 2016 when Gary Barlow jumped on board to lend his creative juices to the script, working alongside Firth to weave in his own lyrical genius and turn the play into a musical.

Some may say this was a huge risk, but after hearing the tunes that have been embedded within the show, it's only fair to say the pair have knocked it out of the park. There are emotionally-charged songs that brought tears to the eyes, and others that were so hilarious we were all crying for a completely different reason! Highlights included the festive Who Wants a Silent Night?, led by Karen Dunbar in the role of Cora; and I've Had A Little Work Done, which Denise Welch delivered with flair as Celia.

This show however is a true ensemble production on every level. It would be unfair to pick a standout star, because absolutely every member of the cast is essential to its success.

Fern Britton is right at home in the role of Marie; the chairwoman of the Knapely Women's Institute group of which all our ladies are a part of. Marie is the embodiment of the stereotype of the sort of women you'd expect to be a member of the WI, in complete contrast to the majority of the other members (and indeed the personality we've seen from Britton throughout her career). It's a testament to her acting that she's so brilliant in the role.

Sara Crowe also excels as Ruth; a lady who volunteers for just about every job at the WI to escape the awful husband she has waiting at home. Whilst she's often giggled at by her fellow WI members (and the audience watching the show!), they're all intensely protective of her.

Then there's the commanding Anna-Jane Casey as Annie; a woman dealing with a heavy load of grief. Casey is unbelievably raw and relatable - likely every person in the theatre last night has been affected in some way by 'the big C', and so we will Annie to succeed at every turn. When  it looks as though her plans for a charity calendar are collapsing, we feel the disappointment alongside her.

Chris, played by Rebecca Storm, is the friend that Annie needs throughout her loneliest days. When she comes up with the idea to put together a nude calendar raising funds for a new sofa for the relative's room in the local hospital, she sparks an excitement inside her friend that she hasn't felt since her husband's passing. Storm is able to deliver both emotional and hilarious moments in her performance, and her chemistry with Annie goes unrivalled.

Newcastle's Denise Welch steps into the shoes of Celia; somebody frowned upon by the other wives at her husband's golf club. Fortunately she's found a home for herself at the WI, despite being the complete opposite to what you would expect from a member of the Institute. Welch is an actor made for comedy, and so this role is one of her biggest achievements in the industry. The execution of her character is unapologetic; Welch in her personal life is a huge champion of equality irrespective of gender and that shines through in her performance.

Karen Dunbar has showcased her comedy chops on a number of occasions in her career, and shows no signs of slowing down here. As Cora, the daughter of a vicar, she's a skilled musician, but someone who brings her own twist to the usual hymns played in the house of God. She's a single parent, and so again is relatable to many in the audience, and proves that no matter whether you're raising a child with the help of somebody else or on your own, you can do a fantastic job.

Ruth Madoc rounds out the group of leading WI ladies as Jessie; a respected former teacher who signs up to the calendar on the condition that it includes "no front bums!". She gets one of the biggest cheers of the night when she delivers a fantastic rendition of the song What Age Expects, and serves as an inspiration to the older members of the crowd who aren't happy to do what others think they should.

Props to the fantastic Isabel Caswell, who plays the young daughter to Marie, Jenny. Caswell is a natural performer and somebody who is surely going to be one to watch in coming years. She's already had a handful of impressive roles, and her star is only going to shine stronger as her career progresses.

Danny Howker and Tyler Dobbs must also be given credit for their brilliant performances as Danny and Tommo respectively. The school friends have great comedic timing and through their characters bring yet another layer of relatability to the family dynamic on display throughout.

With tremendous staging, perfect pacing and a cast that were born to do this, last night's show was without a doubt one of my favourite nights at the theatre, period. Make sure to check it out if given the opportunity.

Calendar Girls the Musical runs until November 10 at The Lowry Theatre, Manchester. 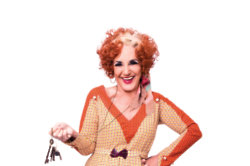 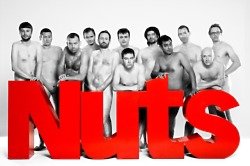 Get some Nuts!
Calendar Girls Story To Be Made Into Musical