Michael Stranney talks to us about his new show 'Welcome To Ballybeg' ahead of the Edinburgh Fringe Festival.

Michael Stranney’s Edinburgh Fringe show ‘Welcome To Ballybeg’ will be at the Pleasance Courtyard – Below for the month of August so we caught up with him to talk about his debut. 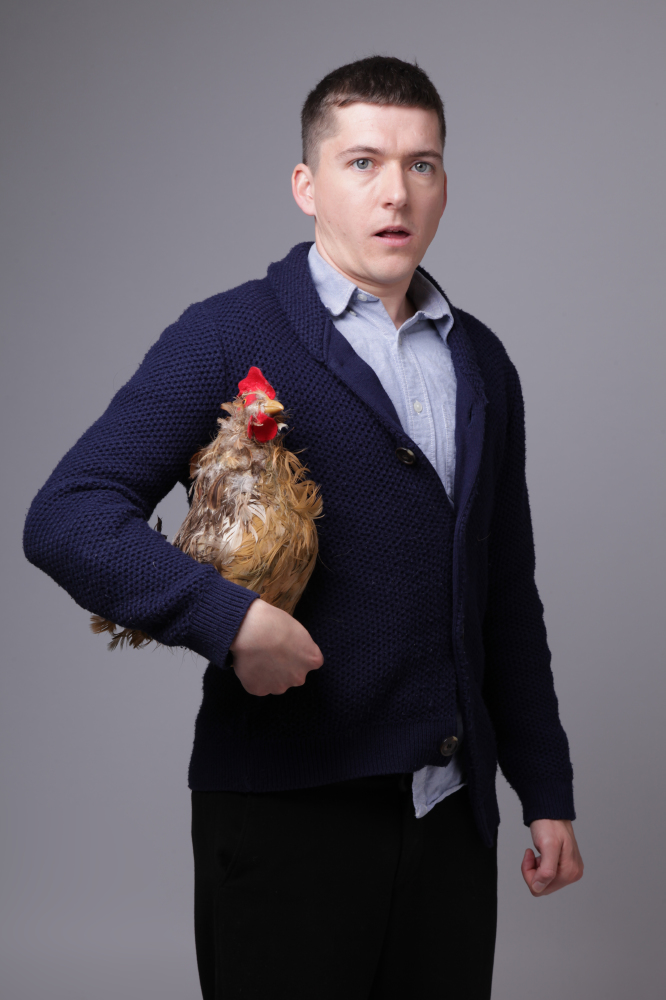 I'd say my brand of comedy is very silly, surreal and above all light-hearted. It's good old fashioned nonsense story telling, all based around a small close knit fictional village in the north of Ireland, called Ballybeg. A curious Irish backwater, packed with bizarre people and places that haven't really progressed since the 1950s.

The premise for the show is that it's a fake tourist board presentation put together by the residents of Ballybeg in an attempt to bring more tourists to the village. I play a character called Daniel Duffy who has taken over from his Grandad to front the presentation. Inevitably the projector breaks down, and Daniel has to fill the audience in on the people and places that make up his hometown. There's video clips, dancing, an unfolding story with a childhood sweet heart and even a raffle!

A lot of the comedian's I admire most are the character comedians, like Nick Mohammed, David Earl, and John Kearns. I love how they create outlandish but believable characters, and worlds that you totally think are real. I'm laughing before they say anything which is a sign that they've totally cracked it.

I also love Tim Key and Daniel Kitson for examples of purely being absolute master craftsmen at comedy. Anytime I see them, I almost feel like giving up! They're a real treat to watch.

And I'd say Woody Allen as well, who I got into relatively late. His nonsense silly story telling is right up my street and something I've always strived to do with my comedy.

Anything silly. Particularly anything silly in a situation where people are trying to be serious. I was in a my local corner shop recently and a pigeon flew in and perched itself ontop of the shelves near the back, and the way the shop keeper wearily sighed, stared at the ground and said 'Jesus not again' made me instantly laugh. He then chased it around the shop with a broom, making it so much worse. It flew everywhere and knocked stuff off the shelves. People were throwing themselves to the floor. It was hilarious

Best moment was probably in 2015 when I won the New Act the Year competition. I had about 30 friends and family in the audience and it was in front of about 500 people. I was so nervous, my time on stage is just a blur, but the moment I finished my set, the wall of laughter and applause that hit me, will stay with me forever. It took me a couple of days to come down. It was amazing.

Plenty of worst moments on stage, one that springs to mind is performing at a rowdy Friday night at Coventry. It was filled with several stag and hens, all of whom were plastered and just wanted jokes on male genitalia etc. My stuff proved a bit too surreal and innocent for their liking, so people were getting up and heading to the bar in droves, others were just shouting out, others were just ignoring me and talking amongst themselves, then someone stood up, and shouted 'you're not funny mate!' and walked out. It was a lot of fun. Such great memories. Lovely place, Coventry.

It depends on the gig. If I have friends or people I know in the audience then yes I will get nervous, because there's a bit more at steak and I'm no longer anonymous it goes badly. but generally as soon as I start I'm fine.

Probably because the whole industry revolves around the fringe, and anyone who's anyone goes up to watch shows, so the last week of fringe in the build up to the awards is a real who's who of the comedy world. Its such an institution now and almost a rite of passage for anyone who goes on to have a career in comedy. Essentially it's just one massive trade show, and everyone's there, with their little stalls, trying to get people to buy into their 'product'. Comedian's are like those people at food trade shows, standing by their stall, holding a little paper plate with tiny bits of cheese on cocktail sticks saying "Would you like to try my cheese? Please have some of my cheese. It's cost me a lot of money. Please. I need this."

John Kearns, Adam Riches, Tim Key and a lot of my mates who are doing their first hour this year too!

Don't compare yourself to other people. I know it's incredibly hard not to measure how well you're doing without comparing yourself to your peers, but it'll only stop you enjoying it. As Doris day says; "K Sarah Sarah".

Also just keep going. Steve Martin has a great quote that says  “Thankfully, persistence is a great substitute for talent.”

Which was easy for him to say because he was insanely talented, but the sentiment is still true.

At a gig in Bournemouth student uni, a student near the front about half way through my set asked with a genuine curiosity ' Are you high mate?'. I replied 'Yes....but I probably look higher than I am because you're sat down and I'm on a stage. But I'm only about a metre off the ground' He didn't heckle again but I don't think he felt fully reassured that I didn't snort some Heroin tablets or whatever before going on.

Michael Stranney’s debut Edinburgh Fringe show ‘Welcome To Ballybeg’ will be at the Pleasance Courtyard – Below for the month of August for tickets go to www.edfringe.com