Clare Bartholomew writes a piece for Female First ahead of her new show The Long Pigs at the Edinburgh Fringe Festival.

One of Australia’s most respected and established clown tropes enter a macabre world of abattoir dwelling, grey nosed, genocidal clowns, hell-bent on purging the world of their red nosed compatriots. THE LONG PIGS is a dark but hilarious comedy, as profound as it is grotesque. Performer CLARE BARTHOLOMEW writes about how ensemble WE3 created THE LONG PIGS from scratch, what inspired them, and how it grew from a short cabaret act, into a full show. 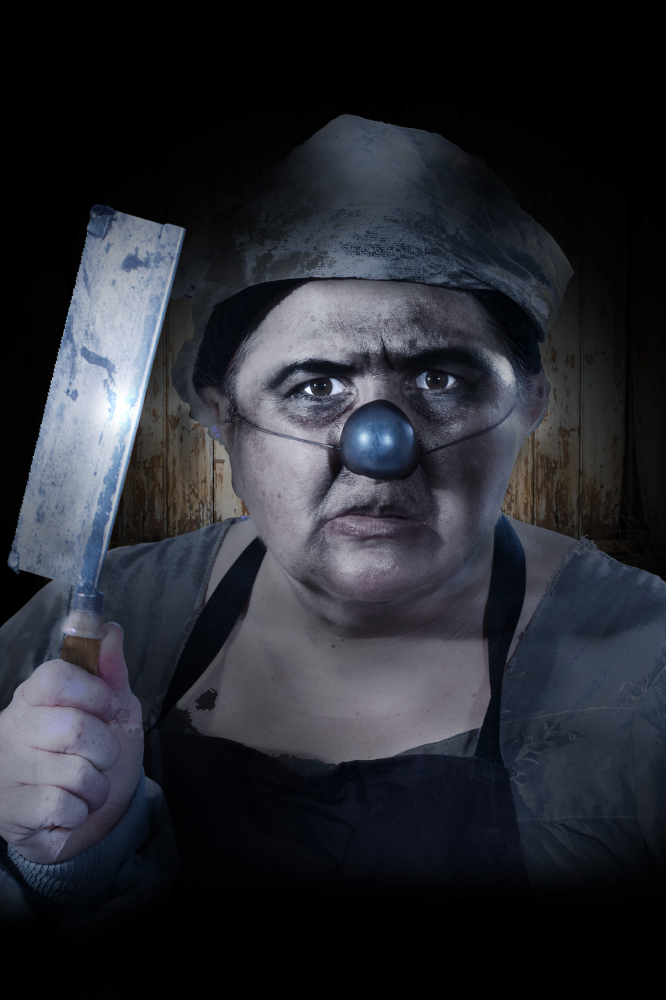 “Look deep into nature, and then you will understand everything better.” - Albert Einstein.

Being in nature is definitely my happy place and in 2011 I found myself at the Tasmanian Circus Festival lying underneath a big tree in Lone Star Valley, North East Tasmania feeling very happy. Mind able to wander freely, beautiful warm breezes, lying on a blanket looking up into the beautiful tree. Little did I know that above me there were numerous tree-dwelling caterpillars’ that would later have me scratching my arms from a nasty rash! But I digress. Lying under the tree and feeling very relaxed, I had one job to do that afternoon: to try and think of an idea for the nightly cabaret.

Two of my favourite performers, (the long-limbed dark clown extraordinaire, Derek Plunkett-Ives and super talented, funny acrobat and clown, Nicci Wilks) were at the same festival and we were finally collaborating for the first time together on a short act. I had first met Derek in a bouffon workshop with acclaimed French clown teacher Philippe Gaulier and we had been following each other’s work ever since. I had also been watching Nicci for many years performing with Circus Oz.

I was teaching clown at the festival and so I had a big bag of red clown noses with me, and a large black billycan on the camp stove. I started to write a story I would later read to Derek and Nicci; three clown scalping comrades, shuffling and snuffling out of the forest with an axe and a billycan of red clown noses. That was our starting point, a short story and some music by Jethro Woodward that we would set the piece to.

As soon as we met later that afternoon our ideas started to flow and pretty soon, we had about seven or eight minutes of material to perform that night. The piece began with us arriving at the outdoor stage after shuffling across the cricket oval wearing a collection of dirty old hospital robes and uniforms looking like a bizarre mix of escaped patients and abattoir workers. We were three black nosed clown scalpers who had been cutting of the noses of our ‘red nosed clown cousins’ to rid the world of these clowns. However, after counting up the noses we find ourselves one nose short!

Our dark clown act at the cabaret night went so well that we were invited to make a companion piece, which we performed two nights later. In our second piece we made a surprise dark ending (to find out what happens you’ll just have to come along to the show)! which shocked the audience. Those two shorts pieces eventually became the start and end of The Long Pigs full show. The reaction from our peers at the Circus Festival was so positive, it felt very exciting… like we were on to something!

Later that year we received some funding to develop our initial two short scenes into something longer for an ‘Explorations’ season of new work in Melbourne. We had a week just by ourselves as a trio where we ordered three inflatable clown fat suits and 4,000 red plastic noses (as you do). We did some skipping and rode around on a tiny clown bike and began playing with traditional ideas of clown and investigating what matters to us in the world.

The second week we spent with director Susie Dee, who worked us hard on the floor delving deeper into the taboos of life and the clowns’ perception of these taboos. Sound designer Jethro Woodward also joined us and worked spontaneously on the floor with us.

At the end of the first performance in the Explorations season, the three of us ran offstage and all looked at each other and agreed that this was the deeply dark and funny show we’d each always wanted to make and couldn’t imagine making with anyone else.

Within a year we had teamed up with set designer Anna Tregloan, lighting designer Andy Turner and a producer. We reworked the show again with Susie Dee and Jethro for a two-week full-scale season at a theatre in Melbourne. Amazing reviews started rolling in which I felt very distant from, as I still felt like I was running through the show in a very technical manner. It is such an intricate show and has so many props that we all have to be very focussed. The show was a hit, with a sold-out extended season and it was clear that the material in the show was resonating deeply with our audiences.

We had wanted to create a work that was highly entertaining but would resonate with audiences making unspeakable (but topical) acts palatable. Black comedy that attacks and questions the values and beliefs that are the lynch pins of current Australian society and psyche. Our shared love to create work that is visceral, meaningful and physical has now led to The Long Pigs finally coming to Edinburgh Fringe.

Do come along! Because how often can you simultaneously be completely entertained and utterly creeped out by the one show?