We love a bit of Joe Wright here at FemaleFirst and his latest movie has seen him reunite with Keira Knightley.

The pair have already worked together on Pride and Prejudice and Atonement and together they have made another gem of a film.

This is an incredibly ambitious vision as Wright blends film and theatre together to deliver an adaptation of this story that you have never seen before.

The theatre element of the movie works really well - although I have to admit that I wasn't sure about it at first - but Wright has delivered a totally engrossing movie that you barely notice.

Anna Karenina is a lavish telling of this well known story and it is bold and beautiful with Keira Knightley delivering another knock out performance.

Wright seems to bring the best out of her as she really does embody the title character - a woman who has never felt love and yet is a devoted wife and mother.

This is the best performance of Knightley's career so far as it is a passionate and yet tortured character that she well and truly gets under the skin of.

He could so easily have been made the villain of this movie as the man who brings the worst out of his wife - but Law never allows this character stray into that territory.

He plays Karenina as a tortured betrayed man who the audience can't help but feel sorry for - he may not have a burning love for his wife but she has a good life with him.

Aaron Johnson was the major weakness in this movie for me and you wonder in more experienced hands just want the scenes with Knightley would have been like.

He turns in an admirable performance and he is by no means awful but the role of Count Vronsky is just missing that something to put it on a par with Knightley and Law.

The support cast as also fantastic but I would have liked to see more of Kelly Macdonald and Emily Watson.

This is a stunning adaptation of a well known story and Wright has not been afraid to put his own very unique stamp on it.

Anna Karenina is out on DVD & Blu-Ray now 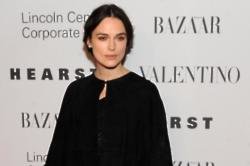