This week marks the return of our True Crime Tuesday series, and we're back with one of the most shocking and confusing stories to-date! If you've never heard of Ursula and Sabina Eriksson, and the "shared psychosis" they're said to have experienced before a terrifying series of events, then stick with us. This is one of the most interesting cases in British criminal history...

Sabina and Ursula Eriksson were identical twin sisters, who were born in Sweden on November 3rd, 1967. According to reports, they lived as normal as any other youth in their younger years, with Ursula living in the United States by the year 2000, and her sister Sabina in Mallow, County Cork, Ireland with her partner and two children.

It wasn't until 2008 when the twins would start to act in an odd manner, with Ursula visiting Sabina in Ireland on Friday, May 16th, 2008. The sisters would depart Sabina's home for Liverpool, England on the Saturday, after an argument between Sabina and her partner the night before. It's thought that they made it to Liverpool from Ireland by ferry.

Once they'd made it to Liverpool, both sisters made a stop at St Anne Street Police Station, reporting concerns over the safety of Sabina's children. Liverpool Police contacted Dublin to ensure the safety of the kids.

At around 11.30am on the same day, the pair would then board a National Express coach headed to London. It was on this journey that things began to get very strange indeed.

Chaos on the motorway

Police reports today state that the twins disembarked the coach early at Keele services, because they were feeling unwell. The coach's driver insists that he left the twins at the services because of their erratic behaviour, however. He said that they were clinging tightly to their bags and wouldn't let them back onto the coach after the service stop, because they refused a bag search. The service station manager also deemed their behaviour suspicious, and so rang the police. Officers arrived and spoke to the twins, but left shortly after and said that they were harmless.

Allowing the pair to depart the services was a huge mistake. They began to walk down the central reservation of the M6 before attempting to cross it, with Highways Agency officers and police from the Central Motorway Police Group called in to bring the chaos to an end. Sabina was struck by a SEAT León before the police arrived, but escaped with a minor injury. When the authorities turned up, they happened to be with a film crew who were collecting footage for the BBC series Motorway Cops.

Note that the footage below from that series may be hard to watch for some people, as it shows the moment that both twins ran out into the motorway, and were hit by vehicles moving at high speed. Both seem to make miraculous recoveries and are in a strange state, with one exclaiming: "They're gonna steal your organs!" Spooky stuff.

Ursula was hit by a Mercedes-Benz Actros 2546 articulated lorry travelling at around 56 miles-per-hour, whilst Sabina was hit head-on by a Volkswagen Polo, also travelling at high speed. Both would survive the carnage, but Ursula was left stuck in the road as the lorry had crushed her legs.

Sabina spent 15 minutes unconscious, but despite the attempts to keep her grounded once she had come around, she started screaming for help and calling for the police, before hitting one into the face and running into traffic on the opposite side of the motorway. At the same time, Ursula was resisting medical help by scratching at the officers restraining her, screaming and spitting at them.

Fortunately, emergency workers and members of the public caught up with Sabina and restrained her, before carrying her to a waiting ambulance where she was handcuffed and sedated. Authorities suspected drug use or a suicide pact because of the twins' strange behaviour.

Air ambulance arrived to take Ursula to hospital, whilst Sabina was taken via vehicle. Sabina is said to have become calmer and controlled when at the hospital, and was released five hours after being checked in, into police custody.

While being processed, she told an officer: "We say in Sweden that an accident rarely comes alone. Usually at least one more follows - maybe two."

She would be released from court on May 19th, 2008 without a full psychiatric evaluation, having pleaded guilty to the charges of trespass on the motorway and assaulting a police officer. She was sentenced to one day in custody, which she was deemed to have served having spent the night in the cells, and so was released.

The murder of Glenn Hollinshead

Following her release, Sabina began to wander the streets of Stoke-on-Trent, in an attempt to find her sister in hospital. She was spotted at 7pm by two local men who were walking a dog, one of which was 54-year-old Glenn Hollinshead. He was out with his friend, Peter Molloy. Stroking the dog and striking up a conversation with the men, Sabina asked if they had directions to any nearby bed and breakfasts or hotels, but Hollinshead took pity on her and offered her a place at his home for the night.

Accepting his offer, all three headed back to the house and enjoyed a few drinks, but Sabina's behaviour would start to worry the two men. She would constantly be checking out of the window, and offered the men cigarettes before snatching them from their mouths, worried they may be laced with poison. Molloy left the house just before midnight, whilst Sabina stayed the night.

The next day, Hollinshead tried to help Sabina find her sister. She stayed in the house throughout the day and, at 7.40pm whilst dinner was being prepared, Sabina stabbed Hollinshead. He staggered out of the house, telling a neighbour "she stabbed me", before collapsing to the ground and passing away.

Sabina would flee the scene as the neighbours contacted the police, equipped with a hammer, which she would use to continuously hit herself in the head. A passing motorist stopped to try and take control, but he was struck on the back of the head with a roof tile Sabina had in her pocket. Paramedics arrived and gave chase, before the pursuit came to an end at Heron Cross, where she jumped from a 40-foot high bridge onto the A50. She broke both ankles and fractured her skull, before being taken to hospital.

The trial of Sabina Eriksson

An arrest of Sabina would be made on June 6th, 2008, whilst she was recovering at University Hospital of North Staffordshire. She would then be discharged in a wheelchair on September 11th, 2008, at which point she was taken into custody and charged with murder. Ursula was also released from hospital in September, before being relocated back to Sweden, and then the United States.

Sabina's trial was scheduled to start in February 2009, but when there was difficulty in obtaining her medical records from Sweden, it was postponed until September of the same year. It took just a day for Sabina to plead guilty to manslaughter with diminished responsibility. Her victim was stabbed five times with a kitchen knife.

She offered no explanation for her actions during her interrogation or the trial, with both the prosecution and Sabina's defence claiming that she was insane at the time of her killing, but was sane enough to stand trial.

It's at this point of the defence where things get a little odd, as the counsel claimed Eriksson was a "secondary" sufferer of folie à deux, influenced by the "primary" sufferer - in this case, her twin sister. They also told the court that Sabina suffered from a rare psychiatric disorder which made her hear voices.

Folie à deux is also known as "shared psychosis", in which delusional beliefs are transmitted from one individual to another. It would mean that Sabina was highly susceptible to influence fromher sister, and was acting in such a way because of her twin's actions.

Sabina's guilty plea was accepted by the prosecution at Nottingham Crown Court on September 2nd, 2010. Justice Saunders said that she had a low level of culpability for her actions, sentencing her to five years in prison, to be served at Bronzefield Women's Prison. She would be left first eligible for release in 2011, after spending 439 days in custody ahead of sentencing.

Hollinshead's brother Gary has been critical of the justice system, and said of the case: "We don't hold her [Sabina] responsible, the same as we wouldn't blame a rabid dog for biting someone. She is ill and to a large degree, not responsible for her actions. But her mental disorder should have been recognised much earlier."

He continued: "I do question the criminal justice system for allowing somebody like this to be let out [of her initial custody] when she is capable of committing such a crime. Her mental condition should have been properly assessed after what she did on the motorway and the experiences the police had. Her mental disorder should have been picked up prior to her being let out into the community... [Glenn] saw Eriksson in distress and was just trying to help. He wasn't slow in coming forward to help somebody in distress. It was in his nature. He was trying to help. He would help anybody."

Signs of a cover-up

On December 6th, 2012, footage filmed at the time the twins ran into the motorway was uploaded anonymously to the internet. It shows two police officers discussing the incident, and agreeing that Sabina should be given a "136".

This means that the police would have been able to hold her legally as part of the Mental Health Act, to give her a mental health assessment. This never happened, but if it had, she would never have been released after one day and Hollinshead would never have met her in the street, leading to his death.

Exactly why this footage was never used in the documentaries showing the footage from the motorway incident has never been revealed.

MORE: Who is John Demjanjuk, the subject of new Netflix series The Devil Next Door? 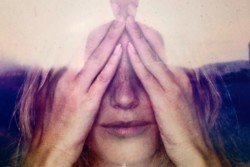 Trailer: India and Catherine Oxenberg reveal the truth behind the NXIVM cult in new series Seduced

True Crime Tuesday: Who is John Demjanjuk, the subject of new Netflix series The Devil Next Door?