Uncharted: The Nathan Drake Collection - out October 9 on PS4

The Bluepoint Games team have now rebuilt the Nathan Drake Collection for fans, so that gamers who enjoyed the story the first time round and new players can enjoy Drake's adventures on the PlayStation 4 with enhanced graphics and gameplay. A brand new Photo Mode allows tools in the game to see special moments caught by avid consumers, and various improvements have been made to texture mapping, audio, rendering and lighting so that all three of the titles in the collection look and sound their very best.

Assassin's Creed Syndicate - out October 23 on PS4, Xbox One (PC on November 19)

The time is London, 1868. The Industrial Revolution is transforming the lives of millions with technologies nobody expected to ever come to fruition and opportunities are rife in England's capital, leaving people rushing to the city to capitalise. No longer controlled by kings or politicians, religion or emperors, there is a common denominator that everybody wants to get their hands on: money. But not everybody is able to enjoy the benefits. Players will be introduced here for the first time to assassin Jacob Frye and his twin sister Evie, who will change the fate of millions in the new game whilst attempting to break the corruption London has fallen victim to.

Once more gamers are going to be put to the test as a mysterious and unstoppable force threatens the galaxy, but with the Master Chief missing and his loyalty questioned, Guardians paves the way for one of if not the most dramatic Halo story to-date. Up to four players can run through the campaign mode co-operatively through the three worlds on offer, and that's only scratching the surface of what the game has to offer. With an array of multiplayer modes including the all-new Warzone, masses of players can get together for a huge battle to the death - it's looking incredible.

TellTale Games have now got their hands on the world of Minecraft, and this month sees the release of the first of five episodes in a series taking fans to the Nether, the Farlands, the End and beyond. Driving the story through decisions made by the player, protagonist Jesse and his group of friends discover that something dreadful has gone wrong, and before long the characters set off on a journey to find The Order of the Stone - their only hope in saving the world from oblivion.

The WWE are hit and miss with their gaming titles, but with the huge rehaul of online multiplayer and MyCareer amongst the new features coming to WWE 2K16 we can't help but be excited. The game will this year feature the largest roster ever, including WWE Superstars, Divas, NXT Superstars, Hall of Famers and iconic wrestling legends. 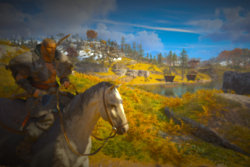