Decided on a Staycation this Bank Holiday, well we have got the lowdown from Toyota and DadblogUK on how to avoid the horrors and make your journey go like a dream

As thousands of UK drivers set off on UK staycations this week, a new survey of more than 1,000 UK drivers, by Toyota, reveals that holiday car journeys can be stressful, as 79 per cent of UK drivers admit they aren’t calm in the car, with the leading causes of arguments being: How to pack the car

The survey showed that problems can arise early in the journey. Only 32 per cent of survey respondents said they make a list of what they want to take and almost one in 10 (9 per cent) have had to turn back because they’ve forgotten something every time they’ve gone on holiday.  A further 42 per cent admit they’ve sometimes had to turn back.

More than half of those surveyed admit they forget things they want to take on holiday, and items most likely to be left at home are:

The Toyota survey also highlights a lack of organisation even before setting off, as recommended pre-journey safety checks are often forgotten. While more than 80 per cent of those surveyed check their car’s oil, water, tyres and fuel levels before setting off, 50 per cent don’t make sure they have their insurance details with them and 60 per cent don’t check if they have their warning triangle, spare tyre, high-vis vest and spare bulbs in the car.

While many factors can make a journey stressful, packing the car needn’t be one of them, as Toyota has got together with John Adams, father-of-two and founder/author of dadbloguk.com to put together top tips on the best way to load your car.

John’s tips are illustrated with photos of him loading a Toyota Corolla Hybrid 1.8 Hatchback, which has a 361-litre boot that measures 350mm high and 1,395mm wide. 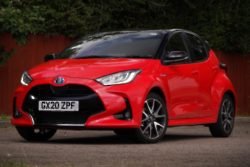 Female First Take A Look at The 2020 Toyota Yaris Hybrid