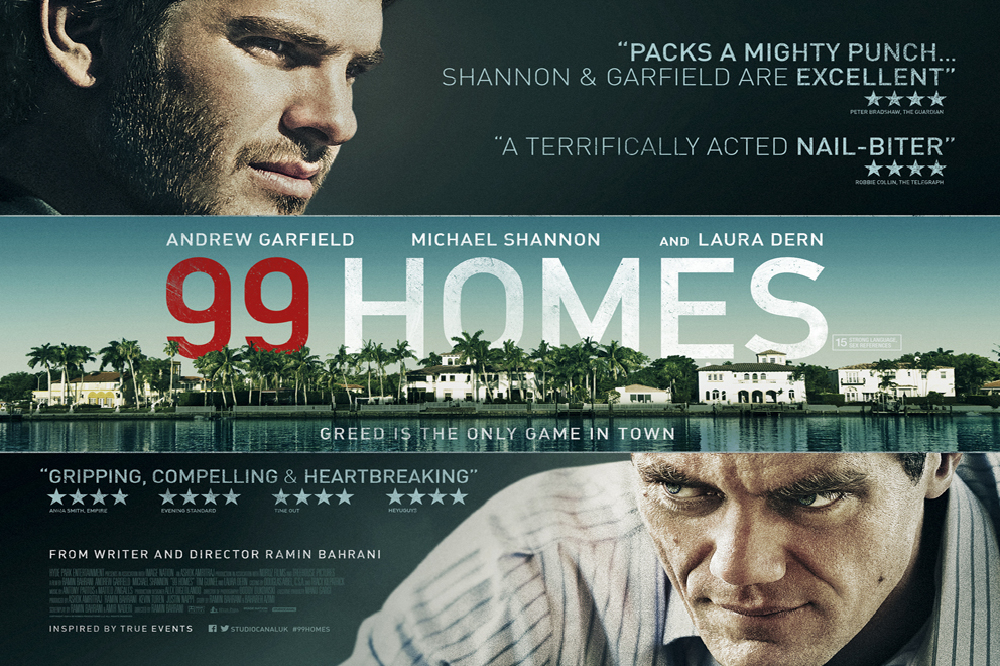 It has been a very quiet film year for Andrew Garfield so far in 2015, but this week he returns to the big screen with his new movie 99 Homes, which sees him team up with director Ramin Bahrani.

As well as being in the director's chair, Bahrani has also penned the screenplay and this is his first film since At Any Price back in 2012.

In this timely thriller, charismatic and ruthless businessman, Rick Carver (Shannon), is making a killing by repossessing homes - gaming the real estate market, Wall Street banks and the US government. When he evicts Dennis Nash (Garfield), a single father trying to care for his mother (Dern) and young son (Lomax), Nash becomes so desperate to provide for his family that he goes to work for Carver - the very man who evicted him in the first place.

Carver promises Nash a way to regain his home and earn security for his family, but slyly seduces him into a lifestyle of wealth and glamour. It is a deal-with-the-devil that comes with an increasingly high cost - on Carver's orders, Nash must evict families from their homes. As Nash falls deeper into Carver's web, he finds his situation grows more brutal and dangerous than he ever imagined.

99 Homes has been playing extensively on the festival circuit over the last year or so and it is great that it is finally getting a theatrical release as it is a wonderfully tense watch.

99 Homes is a movie that explores themes that really are all too common, from the outrageous practices of our banks that have led to thousands of people losing their own homes. This is a movie that looks at how the downturn in the economy in recent years has impacted on the everyday lives of normal people and those who have benefitted from that suffering.

99 Homes explores the fears that everyone has of bankruptcy, the thought of losing everything, and the lengths people will go to to make sure that doesn't happen.

Michael Shannon is simply terrific as Rick Carver and he really does steal the show. Carver is a man that you just love to hate and Shannon captures that greed and heartlessness perfectly. I have been a fan of Andrew Garfield for some time and it is great to see him back in a major dramatic role. It is another terrific performance from the actor as a man who is prepared to dance with the devil to try and protect his family.

Garfield really does capture the anguish and the pain of Dennis, a man is humiliated by the loss of his home. And while Dennis makes some difficult decisions that take him down a very different path, this is a character that you never lose sympathy for. Shannon and Garfield really are terrific and the scenes that they share are some of the film's most powerful and potent.

99 Homes really is a tense drama that has a lot to say about the economic downturn and the realities of living life on the breadline. It is a movie that packs and almighty punch and it is great to see this topic being tackled in a mainstream film.