No summer is complete with the release of a Pixar movie and this week sees Brave hit the big screen.

I caught up with Callum O’Neill to talk about the movie, his character Wee Dingwall and how he found the voice recording process.

- Brave has hit the big screen this week so can you tell me a little bit about the movie?

It is set in 10th Century Scotland and it tells the story of Princess Merida who has reached the age where she is now ready for marriage.

So when the contest come around they are all different shades of capability but she enters herself into the competition and she is a master archer. And so she attempts to change tradition through that - however that doesn't quite work.

So she goes to a witch in the forest and she asks for a spell that changes tradition and to change things around. However that spell doesn't quite go to the plan that she was looking for.

- So how did you get involved with the movie and what did you think about the script when you read it for the first time?

I got involved with the movie originally as a voice artist to provide all of the background voices; any movie that you see with a bit of chit chat in the background or cheering at the Highland Games someone has to provide those voices.

So there were fifteen actors in a studio providing those voices and I was one of them. They asked me to stay behind and audition for the part of Wee Dingwall.

So I auditioned for that and I was told I had got the part twelve months later; yeah they don't do things in a hurry.

- You take on the role of Wee Dingwall in the movie so can you tell me a bit about the character?

He is described as being quite gormless - when you look at the character and see his face you can see that that is the situation. He pretty much lives in his own world.

In comparison to the other characters he is only about three foot and so he is like a human version of a terrier dog. So he is quite happy in his own little world... until a fight brews and when a fight brews he is the first one in there.

And that is what I meant by a terrier dog it doesn't matter how tall he is or how small he is he will fight anyone.

There is a lot of fun with that and it is all humorous and funny fighting - what goes on will make you giggle - and he is definitely responsible for that. There is this side to him as well that just lets the world go by.

- Can you tell me a little bit about the whole voice recording process and how you find that experience as you are an actor and you are stepping into a very different world?

Yes it is. It is a different skill. There are different skills that are needed by an actor whether you are doing TV, film, theatre or voice work; and certainly voice work is a particular skill.

There is a short film in the Brave DVD, that is being put in there as an extra, it is about two minutes long and is a scene between my character and Julie Walters' character the witch.

So most of the time when you are recording you are in the studio on your own and you have to imagine the other character there.

But when you are working with someone like Mark Andrews (director) he directs you so well and he has so much passion and excitement that he gives you everything you need to work off of in order to make sure that you are reacting in the right way.

So yes it is a different skill and you need to use you imagination somewhat but I have been a voice artist for seven years now so it is something I am fairly comfortable with.

- While you say Mark Andrews was great to work with in terms of your reactions and so on but how difficult is it not having your interaction with the other actors?

It depends on what you are doing for the scene. Because I am so use to not having anyone else in the scene with me when I am doing voice work I actually prefer to do it on my own - that way I can get myself into the emotion of the scene and work with it that way.

So I think it is horses for courses and it just depends on how you personally feel about it. But it is like anything if you have got the skill for doing it then it is something that you take on and develop.

But you are not there on your own you have the director there to work with you and to help you and Mark Andrews is a hugely experienced chap; he is a director but he started off as an animator.

- Over the years Pixar and Disney together have created some great movies and characters so what was it like to be involved with a studio and a project like this?

It was huge and it took a while for it to sink in. I was just thinking about it like any other voice job that I would do and it eventually sunk in when I had been talking to people and saying 'oh yeah I have been working with Pixar' and people would say 'that's huge.

The thing that was most impressive for me was they could have just paid lip service to Scotland and Scottish and just used it as some kind of selling gimmick - but they did not to that and they are absolutely authentic to Scotland.

They are so authentic in fact that they worked with Scotland's tourist board Visit Scotland to make sure that they were accurately representing Scotland; not just with the accents and the vernacular but also with the landscapes that they used as well.

They spent weeks if not months researching by embedding themselves in Scotland and working with Visit Scotland to find out 'what is the character of Scotland?', 'what is it about?' and 'how can we be authentic to that and portray it accurately?'.

And that relationship between Disney Pixar and Visit Scotland worked so well that it turned into a joint marketing campaign, and it is the first time that Disney has ever entered a marketing campaign with a country, and that has worked fantastically well.

You can go onto the website visitscotland.com/brave and see just how authentic those landscapes are and how much of real Scotland you are seeing; it may look magical and mythical but it is Scotland and it is real.

The animation is absolutely superb and I would encourage everyone to come and see it firsthand whether it be the Highland Games or if it's going to the Edinburgh Tattoo. Just come and experience it because you will find you own piece of Brave.

- You are a Scotsman yourself so I was wondering what you thought of the way that your country was depicted in the movie?

I loved it, I loved it. The sense of humour is absolutely Scottish. I grew up in a family where there was a lot of mickey taking and I think that this is a Scottish thing as it is almost a term of endearment - you see a lot of that happening in the film as well.

I think, for me, Disney Pixar play with your emotions as one minute they have you laughing and the next minute crying.

But the landscape and the music as well had so much of a part of play in that. I was sitting there in Edinburgh, I don't get home too often, and I am watching this film and it was just reminding me of everything that I love about the country - just talking about it now makes me a wee bit emotional.

It is the most extraordinary place and they have done such a great job of portraying that.

- You have mentioned Mark Andrews and he is the director of the movie along with Brenda Chapman so how did you find working with them?

I never met Brenda because she was working on the first half of the production. From the conception to the box office eight years have passed - there is one scene that lasts three or four minutes, it's my favourite scene, it took eighteen months to make.

Brenda was involved in the first half and then Mark got involved to the completion - so my work with Mark was just from 2011.

Mark is a real inspiration to work with because he gets the best from actors that he works with and he directs you in a way that you always feel it is collaborative and you feel that he is listening to what your creative ideas are.

He was so passionate about Scotland - he has basically adopted Scotland as his other home. It was wonderful to work with him and hopefully, watch this space; I might get to work with Disney Pixar again.

- So what did you think when you saw the movie for the very first time?

I thought it was really really good. I honestly didn’t know what to expect because I didn’t see the whole film as I was working on it as I only saw the bits that I was working on.

So I got a general gist of what was going on - some of the animation that I saw hadn't been completed so some of it was in its very basic stages. It was wonderful.

I actually forgot that I was in it as I just sat there and watched it and listened to it as somebody who likes Disney/Pixar movies - it wasn't until the credits and I saw my name that I felt quite humbled to be such a wonderful part of a great film.

- The movie has been met well in America already but how have you personally found the response to the movie?

It has only recently come out in England so that response is still to come. The response I have had from Scotland, where it came out on the 3rd August, has been overwhelming.

People have been saying that it is much better than they expected - they expected it to be good but they actually discovered that it was great. I think it is a wonderful film and I think that they have hit it perfectly - there is something there for anyone.

I continue to do the voice work at the moment and acting wise I have nothing immediately coming up. But the voice work I am constantly busy and you will be hearing my voice everywhere; the latest thing that you will hear me doing is encouraging you to and see British film in the cinemas.

Brave is out now. 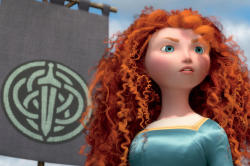 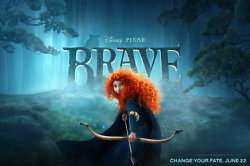 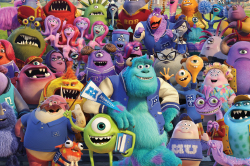