“Many men tried to erase Catherine out of history, but they have failed,”

HELEN Mirren believes her lack of desire to become a big-screen star is one of the reasons why she has stayed at the top for so many years. 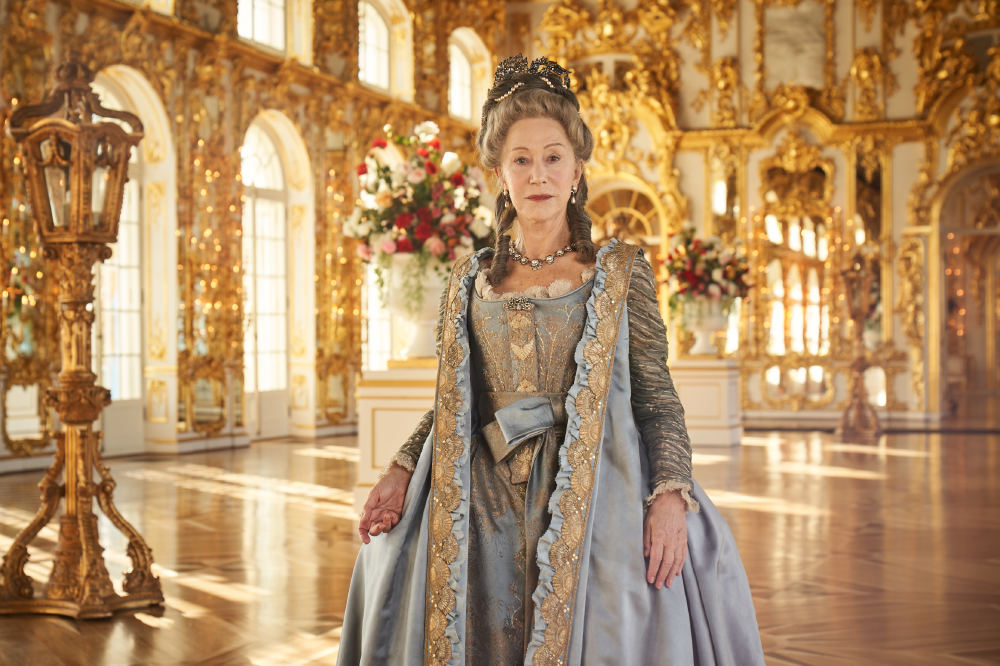 Helen Mirren as Catherine the Great

The stunning 74-year-old cemented her legacy as one of the greatest British actresses of all-time when she claimed an Oscar for her stunning performance in The Queen in 2006, with her roll-call of masterful performances stretching back over five decades.

Yet as this icon sat down for an interview with FemaleFirst at the launch of her latest role playing Russia’s longest-ruling female leader Catherine The Great on Sky Atlantic, it quickly became evident that she has not lived through the agonies so many actresses endure.

“In my profession, most people are constantly unemployed,” began Mirren. “You finish one job, you can wonder where the next paycheque is coming from, but that has never been a big problem for me.

“This is not like a normal occupation where you have security for five years. Your next job might last two days, two weeks or if you are really lucky, two months. Then, once it’s done, you are back outside a hotel room somewhere waiting to go in and try and make them give you a job.

“As we have seen with the countless stories that have emerged amid the #MeToo movement, that situation is very open to abuse, but I never felt that vulnerability because I didn’t really want to be in movies or on TV as badly as most others did.

“Part of why I didn’t want it that much was because I had a very solid theatre career and that was my first love.

“My emotional commitment has always been to the stage and if I didn’t get the next job on TV or another role in a movie, I would have gone back to doing what I loved. That lack of pressure has probably helped me.

“It’s all about being true to yourself and what really matters to you and if you look at my CV, you will see that every four years or so, I have gone back to a job on stage to do theatre again. That has always been a constant heartbeat in my work.”

Despite a prolific back-catalogue that includes more than 80 castings in movies and a host of high profile television and theatre credits, the actress whose list of accolades includes her curious coronation as British Nudist of the Year back in 2004 insists she has not reached the top due to her work ethic.

“I’m quite lazy and one reason I like to get my head into a big role like Catherine The Great is to run away from my laziness,” she declares.

“I tend to be idle at times. I’m happy to sit around the house in something comfortable and do nothing, so it is good for me to get a role that challenges me and that is certainly what I had with Catherine The Great.

“I was often asked in interviews what character I would like to play and I would often answer the question by suggesting Catherine might be fun.

“I was absolutely convinced that it would never happen, but suddenly the opportunity came my way and I’m so proud of what we have produced.

“You cannot go into something like this and just learn a few lines and show up. You have to embrace it, you have to understand what it was like to be a female ruler of Russia at a time when such a prospect was met with huge opposition.

“I knew a little about Catherine before the role came up and as I got to know about her, I liked her even more. She was a remarkable woman in so many ways.”

Mirren’s latest command performance touches the soul little more than most for the girl from East London who was born to a Russian father and christened Ilyena Lydia Mironoff, with the actress eager to defend the 18th Century Empress whose reputation has been tarnished by claims she was a sex-craved ruler.

“Many men tried to erase Catherine out of history, but they have failed,” added Mirren, who had a lengthy relationship with Irish actor Liam Neeson in the early 1980s.

“We all know she was a very successful ruler in an era when women rarely assumed such a significant role in society, but when you get to know her and research who she was and what she stood for, you realise the perception many have of her is misplaced.

“They attempted to discredit her by demonising her as a highly sexed woman and that portrayal was an outrage in so many ways.

“They tried to claim she was sexually promiscuous and had affairs with anyone and anything, but that simply wasn’t the case. That was an attempt to discredit what she achieved, but it has not worked because she is immortalised as Catherine The Great.

“She did have a series of monogamous lovers, but was not this sex crazed addict that was belittled during and after her reign and I hope this story we have done for Sky Atlantic sets that record straight.

“Sex was viewed very differently in Catherine’s era. If you go to watch 18th century plays, they are full of goings-on, for want of a better phrase.

“It was an 18th century thing rather than a Russia thing and I don’t think you can say they are wrong and we have it right now with our attitude towards relationships.”

All episodes of Catherine The Great are available to watch now on Sky Atlantic.