Will Smith is one of the biggest, most recognisable, and most successful actors working in Hollywood today - and he has already enjoyed a career that has spanned over twenty years. 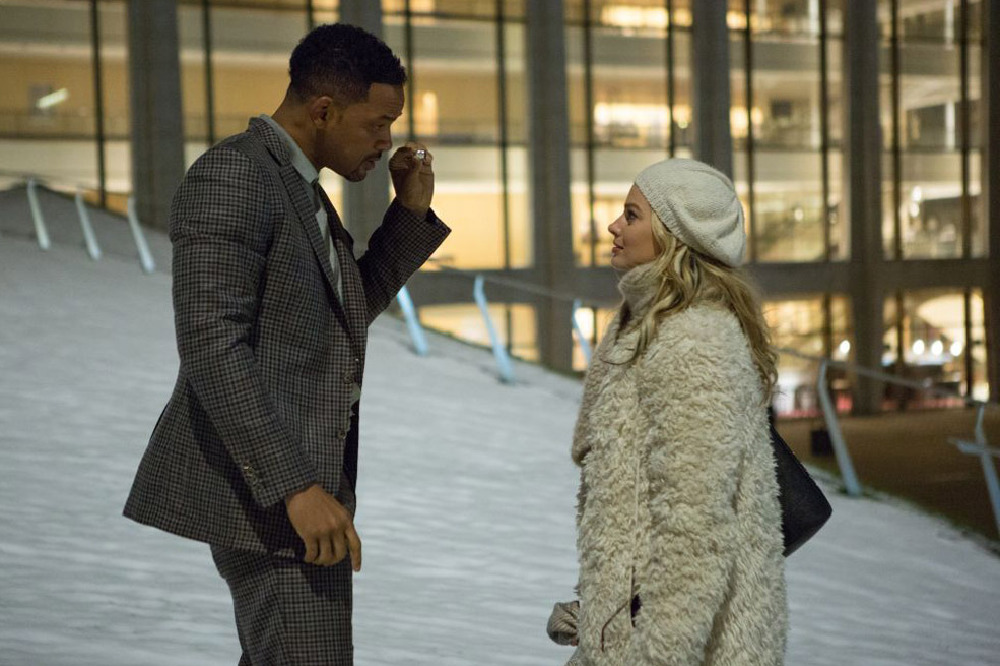 Will Smith in Focus

During his career, Smith has showed that he is an action hero, great dramatic leading man, and comedy star - is there anything that this actor cannot do on the big screen?

Smith has teamed up with Margot Robbie for the stylish hustle movie Focus - which it out on Digital HD from today - and we take a look back at the movies that made him a box office star.

It was back in 1995 when Smith blasted onto the big screen in Bad Boys, which was the actor's first foray into the big budget action movie. Bad Boys saw him star alongside Martin Lawrence, while Michael Bay was in the director's chair.

Smith and Lawrence teamed up as Mike Lowrey, and Marcus Burnett, two detectives attempting to protect a murder witness whilst investigating a case involving dirty cops and a large amount of stolen heroin.

While there are some great acting set pieces and the huge explosions that you expect from a Michael Bay movie, it is the chemistry between Smith and Lawrence that makes this movie what it is. The duo makes a great comedy pairing and the banter between these two charismatic and likable characters is the film's major strength.

Bad Boys may not have been the film that established Smith as an action hero or a leading man, but it was the film that showed that there was a new star to watch out for... and all the studios sat up and took notice.

I don't know about you, but my favourite Will Smith film comes in the form of Independence Day - and next year the movie will be celebrating its twentieth anniversary.

While Smith did enjoy success with Bad Boys, Independence Day was an even bigger action movie and was the film that really brought Smith to an even wider global audience.

When a monstrous mothership threatens to wipe out the human race, Captain Steven Hiller (Smith) and David Levinson (Jeff Goldblum) is tasked with flying aboard the spacecraft in a last attempt to save Earth.

Directed by Roland Emmerich, Independence Day was the perfect mix of action, comedy, and science fiction, which showed off Smith as a versatile actor who could tackle all of those genres. It was the biggest lead role of his career to date and it was to be a movie that was to send his star rocketing.

Independence Day was both a critical hit and a commercial smash as it grossed in excess of $817 million worldwide - it was the highest grossing movie of 1996 and was the second highest grossing film of all time at the time.

The movie that really cemented Smith as a bona fide leading man came in 1997 when he teamed with Tommy Lees Jones for Men In Black, which was based on the comic by Lowell Cunningham and directed by Barry Sonnenfeld.

Will battled aliens once again as one half of the secret agent duo Jay (Will Smith) and Kay (Tommy Lee Jones) in Men in Black. The two MiB agents find themselves in the middle of a deadly plot devised by an intergalactic terrorist (Vincent D'Onofrio), who has arrived on Earth to assassinate two ambassadors from opposing galaxies.

Men In Black was one of the best summer blockbusters of the nineties as it was action packed, a smart and slick script, that mixed action and humour with some great comedy. Smith and Jones were great opposites; Jay is new to the Men In Black game, while Kay is an old hand and has sacrificed so much to do his job.

The wise cracking humour from Smith is balanced brilliantly with the dry comedy from Jones - together, they really did make a terrific film partnership.

Men In Black was a box office smash in the summer of 1997 and finished the year as the third highest grossing film, behind Titanic and The Lost World: Jurassic Park.

In 2002, Smith moved away from the action and comedy roles to play boxing legend Muhammad Ali in the biopic movie Ali.

The movie saw Smith team up with director Michael Mann for the first time in a movie that chronicled the life of the notorious boxer; from his capture of the heavyweight title, to his conversion to Islam, and then his reclaiming the title from George Foreman in the legendary 'Rumble in the Jungle' fight of 1974.

Ali was the movie and the role that showed that there was more to Smith as an actor that just action and wisecracking humour. This was the movie that really established Smith a truly versatile actor who could tackle any genre.

Smith underwent a remarkable transformation to play Ali, and he really got under the skin of this character as he portrayed his life both in and out of the ring - as well as the social and political upheaval in the U.S at the time.

For his central performance, Smith was nominated for his first Best Actor Oscar - losing out to Denzel Washington for Training Day.

Smith returned to comedy in 2005 as he took on the title role in the Andy Tennant directed film Hitch; it was the first time that the actor had teamed up with the director.

Hitch is a slightly unorthodox 'Date Doctor' who helps men to get the women of their dreams. Hitch falls for gossip columnist Sara (Mendes) whilst trying to set up the hilariously smitten Albert (Kevin James) with celebrity Allegra Cole (Amber Valletta).

Hitch is a movie that really is a lot of fun and showed - once again - that Smith is a leading man with real charisma and charm. It is a performance that is packed with humour and warmth and you want nothing more than to see this character find a little bit of happiness for himself.

While Eva Mendes was Smith's leading lady, it is Smith's great chemistry with hapless in love Albert - played fantastically by Kevin James - that is this film's best relationship.

Hitch opened at #1 at the U.S. box office and was the fifth consecutive Will Smith movie to do so - following in the footsteps of Shark Tale, I, Robot, Bad Boys II and Men In Black II.

Another of my favourite Will Smith movies came in 2007 when he returned to the biopic genre with the very moving The Pursuit Of Happyness.

Smith took on the real-life role of Chris Gardener, a San Francisco salesman struggling to build a future for himself and his 5-year-old son. When Gardner lands an unpaid internship in a brutally competitive stockbroker-training program, where only one in twenty makes the cut, with self-confidence, dedication and the love and trust of his son, he rises above his obstacles to become a Wall Street legend.

The Pursuit Of Happyness was the best dramatic performance of Smith's career - and remains so nearly a decade later - as he gives a moving performance as a father who is trying to better the life of his young son.

The Pursuit Of Happyness tale of struggle and the determination to succeed and you cannot help but be swept away in Smith's terrific central performance.

Smith picked up his second Best Actor Oscar nomination for his work - this time losing out to Forest Whitaker for The Last King of Scotland.

Will Smith stars as Nicky, a seasoned master of misdirection who becomes romantically involved with novice con artist Jess (Margot Robbie). As he's teaching her the tricks of the trade, she gets too close for comfort and he abruptly breaks it off.

Three years later, the former flame - now an accomplished femme fatale - shows up in Buenos Aires in the middle of the high stakes racecar circuit. In the midst of Nicky's latest, very dangerous scheme, she throws his plans through a loop... and the consummate con man off his game.

Focus is a slick and sexy movie that is packed with great twists, turns, and boasts a great central performance from Smith. It is great to see the actor having fun with a role again and he and Margot Robbie make a truly engaging central pair.

Focus will be available on Blu-ray on and DVD on 6 July as well as Digital HD from 22 June.

Tagged in Will Smith Men In Black Independence Day