After a career spanning over two decades, LeAnn Rimes shows no signs of slowing down despite the constant tabloid rumours that surround her and her marriage to Eddie Cibrian - enough to put most people off a life in the spotlight. Strong-willed and determined to succeed, LeAnn has seen major success and still looks hungry to carry on down that route, no matter who or what stands in her way.

Now in an exclusive and new interview, LeAnn opens up about some of her favourite career moments, dealing with the pressures of fame and negative headlines, her funniest rumours and much more.

So LeAnn, you've been in the business for two decades! Does it ever get old?

The actual performing and recording part - NEVER! I can't picture myself doing anything else and my career has taken me to so many incredible places to meet so many incredible fans. I am proud to still be around, continuing to evolve my career into new sounds and genres. Music is ever-changing and you have to keep up!

What are some of your greatest memories and moments in your career to-date?

I want to say that it was up on stage winning a Grammy but in all honesty, I barely remember it; I was so young. While I have had so many highlights that I am truly grateful for, I think the evening that sticks out in my mind lately is the 2013 ACAs when I was asked to sing a tribute to Patsy Cline. I have been compared to her my entire career and when given the opportunity to pay tribute to her through her own music, wow, you could hear a pin drop in that theatre. I was incredibly emotional and honoured I was the one who got to celebrate her life and music. I still get chills thinking about it.

Now you're to release brand new dance remix album 'Dance Like You Don't Give A...' - why did you decide to go ahead with this release rather than a whole body of new work?

For the fans! I get approached all the time and asked when I am going to do more remixes and I thought, why not? This was a great last hurrah with CURB Records (the record label to which I just wrapped up my 20 year contract with them) and it gave me a chance to put a dance spin on so many of the hits that have been released throughout my career. Not to mention, I love to dance too!

A lot of the tunes on the record are previously unreleased remixes, do you have any favourites?

Picking a favourite song is impossible - they all hold such special meaning to me for their own unique ways. I know that sounds cliché but it is true.

You are the last person to do In Bed With Joan before Joan Rivers passed away - how was that whole experience for you and what type of woman do you remember Joan as?

I am so lucky to have gotten to know Joan Rivers over the course of my career. She is a legend and was the absolute kindest, most hilarious woman whose light just filled the room. She couldn't have made Eddie and my experience any more enjoyable and her strength and no-bullsh*t attitude is one I will forever admire.

Recently LeAnn & Eddie your new reality series began airing in American, how have you found the response to this venture?

It was such a wonderful experience. First and foremost, Eddie and I got to work together! We had a chance to turn the tables on all the lies and false stories that have been following us for years and have some fun. We laughed so much throughout filming and our fans got to see who we are as a couple and how we don't take ourselves and this whole 'Hollywood machine' seriously.

You've faced some backlash in the past from the media and because Eddie's ex Brandi appears on reality show The Real Housewives of Beverly Hills - how do you cope with all of that?

First off- I do not watch the show (or TV for that matter). I know how overly exaggerated those stories are so honestly I can let it roll off my back and somewhat be amused by it. A thick skin and good sense of humour is essential in this life I live.

Another publication is reporting that Eddie may have strayed during your relationship - would you like to comment on that now or set that straight?

If I took the time to comment on every ridiculous story the tabloids and blogs wrote about me, I really wouldn't have time for much else. We literally get written about every week with conflicting stories in publications owned by the same company! What I will say is that I trust my husband 100%.

What have been some of the funniest or favourite rumours you've seen regarding yourself?

Oh I love the one that I got ab and cheek implants! There is also a good one about me trying to freeze Eddie's sperm so I can have his child in an attempt to keep him from leaving me. Every time I think I have heard the most over the top one, I get an email from my publicist with something new. It is hilarious!

What tips do you have for people on maintaining a healthy relationship where you can battle against anything thrown at you?

Honesty, communication and respect. I think it's important to remain a team. Laughter always helps too. Laughter makes everything better.

Finally - what's next for you?

I have a Christmas album coming out called 'ONE CHRISTMAS' that is the first of a three-part album (with one being released consecutive Christmases), a few fun projects in the works and of course, working on that music.

LeAnn Rimes' 'Dance Like You Don't Give a … Greatest Remixes ' is out today on Curb Records. Pre-order on Amazon: http://www.amazon.co.uk/Dance-Like-Dont-Greatest-Remixes/dp/B00NOFVYXK/ref=ntt_mus_dp_dpt_1 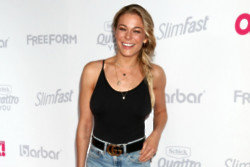 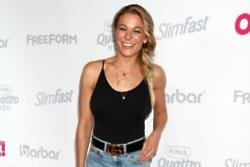