Falling At The First Hurdle

With A Gifted Man coming to UK screens tonight for its solo series run, it seems harder and harder for shows to get over that first series hump and become the prime-time mainstays they just crave to be.

Despite ok ratings, the show routinely raked in over eight million viewers each week and hitting in the mid nines in the last episodes, and a really solid cast and a bankable star in Patrick Wilson, CBS thought it wasn’t worth keeping around.

A Gifted Man wasn’t the only show cut down after one series in the States. In the same batch of shows were the fantastic cerebral police drama Awake (hello to Jason Isaacs), the incredibly high budget, Spielberg produced sci-fi show Terra Nova, J.J Abrams backed thriller Alcatraz and period piece Pan-Am are among the shows only being allowed one bit of the cherry.

That massive names were attached in some way to both Alcatraz and Terra Nova, it beggars belief that they alone aren’t enough to guarantee a second year.

You could even understand the giant networks pulling the plug on a show if it’s been simply terrible. That’s the fate that’s been met by serially un-funny comedy Are You There Chelsea? (another example of the terribleness that is Chelsea Handler), but even bad show’s often get picked up for multiple years. Just look at how successful NCIS has been, a show unilaterally poor in all its incarnations.

It’s not new though for shows more than justifying a second year but not getting it. Firefly (which we talked a whole lot more about here), Freaks and Geeks (also, here), Undeclared, New Amsterdam and Terriers all bit the dust long before they really should have.

Whether it was truly intriguing premises (New Amsterdam starred an immortal cop who could only die when he met his true love), brilliant writing or just a combination of both, there are plenty of fan favourites littering the pile of discarded TV shows.

It’s not just the slash happy Americans who are willing to can a show before it really gets going. This year BBC Three’s brilliantly bonkers and messed up horror thriller The Fades was given the axe after an enthralling debut year. A victim of the continued success of Being Human and new drama Lip Service, The Fades was the victim of a lack of budget provided to BBC Three for original drama. That The Fades then went on to pick up the BAFTA for Best Drama Series was just insult to injury for the cast, crew and rather large fan base. More Family Guy it is then for the digital channel.

The BBC have also killed off Dirk Gently and Outcasts this year after only one run, but they are easily the harshest of the providers over here. Both ITV and Channel 4 are far more kindly when it comes to renewing TV shows (namely as ITV takes far fewer risks and Channel 4 imports more content than the BBC does) and even the BBC generally give far more time to troubled shows that their American brethren.

It’s a tricky line to cross. You’ve got to be new and interesting, but not scary and too different. While some shows manage to get over this first and by far biggest hurdle, some fall by the wayside, even though they followed all the rules.

So, if you find a show you like, support it. Watch it, tweet about it, even make an infernal hash tag if you must. Every little helps in that race for a second series. 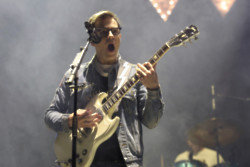