If you’d have said the name Karl Pilkington five years ago, only a few people would have replied with anything other than ‘Who?’. Now, after the massive success of An Idiot Abroad, the Mancunian’s moniker is all you need to say to get people chuckling.

So, the question arises, just how did he rise from anonymous producer to household name?

It all started with Ricky Gervais and his writing partner Stephen Merchant deciding to hop aboard the increasingly popular trend of podcasting, deciding it was the best way to flex their comedic muscles.

Having worked with him extensively on their XFM radio show (and towards the end of their time there began to make him a more prominent part of the show), they had seen the brilliant simplicity of Pilkington and thought that it would be perfect for the podcast.

It was here that Pilkington began to cultivate a following, with his deadpan delivery and wonderfully matter-of-fact view on life’s issues making him absolutely hilarious to listen too.

If anyone can keep a straight face during one of his long rants and rambles about a subject, then they might need their funny bone checking.

The podcast eventually became such a hit that it was converted into a TV show in the form of The Ricky Gervais Show, where snippets of the podcast would be put to animation. The show launched in 2010 on HBO and Channel 4 and even more so put the spot light on Pilkington’s ramblings.

From nonsensical ideas about trousers being made redundant, to his crazy idea for what the ultimate animal might be, Pilkington’s speeches are a thing of beauty.

It was Pilkington’s success on the podcast though that led to the creation of An Idiot Abroad, a show that would see Pilkington visit the New Seven Wonders Of The World and record his experiences along the way. While we’ve talked more in depth about the show here, it’s fair to say that it’s been somewhat of a success.

Pilkington now has such a comedy cache to his name that he’s even breaking into being more than just his own, dry self, making his acting debut earlier this year in Ricky Gervais’ latest comedy Derek as the titular character’s best friend Dougie. Although Derek was originally just a one-off episode, Gervais claims to be writing a full series of the show, which would see Pilkington reprise his role.

While it’s not clear what the next project Pilkington will be involved with is, his series of inane ramblings have made his unique brand of comedy a smash hit and have given him a fan base that will always come running when they hear his dulcet tones.

Karl Pilkington also joined the esteemed ranks of Ian Somerhalder, Ben Affleck Liam Neeson as out eye candy of the week, have a look why he made our very special list right here. 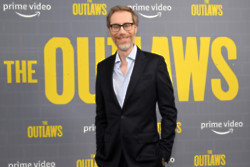