Ahead of the release of London Spy's first season on DVD, Female First can exclusively bring you an exciting Q&A with one of the show's big stars - Jim Broadbent.

What does the story of London Spy focus on?

The central character is Danny who falls in love with a young man and this is clearly the love of his life. And quite early on this young man dies under mysterious circumstances and the arc of the five-part series is the implications and ramifications of that on Danny's life.

What's exciting is the whole story is such a strong story and it's an unusual story and the fact that the central characters are gay is sort of peripheral to the arc of the thriller. There's a great sort of ethical idea and dilemma at the heart of the story which makes it gripping and totally original.

Can you tell us more about the character you play?

I play Scottie who's an old friend of Danny's and Scottie has had some experience in the secret services and he is able to help Danny in his quest to sort out the after effects of this murder.

What role does Scottie play in Danny's life?

Initially he's advising or concerned about Danny falling head over heels in love with this guy and he wants to check him out and see that he's not going to be a bad egg in terms of Danny's life and so a meeting is arranged and Alex passes Scottie's test as it were.

How does Scottie help Danny after Alex dies?

When Alex disappears and is found to have died, Danny comes to Scottie for advice and help and Scottie agrees reluctantly or positively and gets engaged with the ongoing narrative.

What did you think of the script when you first read it?

Getting the script was a treat, I knew Tom Rob Smith's writing anywhere, I'd read his three Russian spy novels or secret service-KGB novels before, long before the script came my way so I knew I was in for a good thriller really and it's absolutely proved true. It's a really good read so I'd leapt through the five episodes very quickly and I always love a good strong thriller narrative myself anyway, so that was great to be part of that.

How was it working with Ben Whishaw?

Ben's a wonderful actor and I'm completely in awe of the ease and the subtlety and the reality that Ben brings to his characters, it's really brilliant.

How was Jakob Verbruggen as a director?

Jakob is a very engaging and engaged director who is very communicative and positive. And he's clearly got a great relationship with the director of photography, Laurie, and they have a good, positive approach which infects the whole production.

How do you think audiences will react to the series?

It's a very provocative series, there will be lots of questions asked that people will be fascinated by and there will be a lot of discussion I think after the series and it will be a gripping and engaging series anyway. All the time people will want to know what's happened and what's going to happen and why it's happened and I think in an entirely original way it is going to engage the audience incredibly. 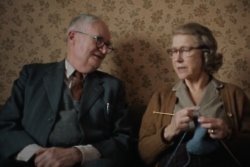