Chris Tarrant thinks that if Who Wants To Be A Millionaire returns, it should be Carol Vorderman who hosts.

The 67-year-old presenter is adamant he won't return to the gambling programme after the show is axed in the New Year, but he believes the 52-year-old star would be the perfect host if it ever made a reappearance on screens in the future.

Speaking to The Sun newspaper, he said: "Carol Vorderman is the most scary woman on earth -- terrifying -- bless her.

"Carol did the first ever celebrity Millionaire and it was much tougher because in those days we didn't give them a friend. She was on her own -- me and her eyeball to eyeball. And she was so good. I think it'd be quite good to have a woman do it."

The 'Loose Women' panellist will partner Caroline Quentin in tonight's live celebrity show, along with Sir Alex Ferguson and Eamonn Holmes, and Kian Egan and Rebecca Adlington in a bid to win some cash for charity.

However, Chris, who has fronted the quiz programme for 15 years, admits tonight's show - ahead of pre-recorded episodes in 2014 - will be emotional for him to watch.

He explained: "I will be sad actually. We have had so many amazing nights together in 15 years so a lot of it'll be about that. The show itself has been fantastic. 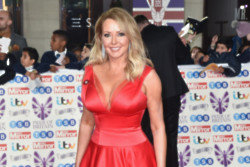