Stephen Lord has made a huge name for himself on British soil, starring in some big blockbuster movies and brilliant television series with early work including comedy series Common As Much and a 2007 slot as Jase Dyer in BBC One soap EastEnders.

Deciding to only stay on that show for a year and leaving in a violent storyline that wasn't without its controversy, Stephen departed and joined Casualty before taking on a lead role in cult Channel 4 series Shameless as Dominic Meak.

Now Stephen's back for the second season of Penny Dreadful after his character Mr Roper survived a vicious attack. Here he talks to us about that role, the show and more - read on to find out what he had to say...

We'll see you in the upcoming second season of Penny Dreadful as Mr Roper, what can you tell us about your character and the role he's going to play this season?

Mr Roper is back like you have never seen him before and he is hell bent on revenge. In the last series he suffered at the claws of Ethan Chandler (Josh Hartnett) and Roper's colleague Mr Kidd (Julian Antelope) was ripped to death in quite a brutal way.

We reveal Mr Roper has escaped the claws of death literally by the skin of his own teeth, but he is damaged mentally and physically. Fuelled by resentment he is keen to get back on the tail of Ethan Chandler no matter what the cost and to fulfil his duty as a bounty hunter.

The show has seen some brilliant success to-date, but what was it that initially drew you to it?

John Logan is a brilliant writer and with Sam Mendes and the folk at Neal Street, married to a network like Showtime and Sky, how can you say no? My character is rich and full - no surprise courtesy of Mr Logan - as are all the characters in the show. It's always great to work in such a creative way and to work with such good actors and directors.

How's the experience of working with people such as Eva Green and Josh Hartnett on-set?

Eva and Josh were both a joy to work with and we have some pretty intense stuff to do but thankfully we also managed to have a fair few laughs.

Can you tell us a little bit about a typical day filming Penny Dreadful?

Very, very early starts and long days surrounded by talented folk across the board so no complaints. I also know Ireland well and the area we were filming as my wife is from there, so I stayed with relatives a lot of the time and it felt very much like working from home.

How did filming this season of Penny Dreadful differ to your previous work?

I think Penny Dreadful had the biggest budget I've worked on, certainly for [a] TV series, and you really do see it on screen.

You've got some brilliant credits to your name, what have been some of your favourite career moments to-date?

Call me biased but working with my wife Elaine Cassidy is a real treat. We did a film The Truth and most recently we worked on Strangeways Here We Come which is the first film through my company Collateral Films.

Now you're also producing and starring in new film Strangeways Here We Come, what can you tell us about that project?

This must now be taking up a huge chunk of your time, just how much work does doing something like this take?

My co-producer Raiomond Mirza (Oh My Productions) and myself optioned and developed the script over at least a two year period, so from actually optioning, developing, filming and then seeing the finished project, I reckon it has to be three years.

Finally are there any other projects you can share some details with us about?

I am looking forward to Legend by Brian Helgeland coming out this year and I did another film, I did Violators by first time writer/director Helen Walsh which I think will be accepted in some good film festivals pre-distribution. I am also keen to work with Aisling Walsh on a project we have been developing.

Penny Dreadful returns to the UK on Sky Atlantic on Tuesday, May 5 at 10pm. 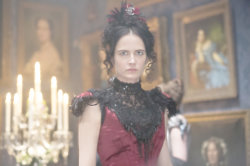