Hope is Something I Do by Jo-Anne McArthur

The photojournalist, speaker and founder of We Animals Media writes a piece for Female First.

I remember the first time I entered an industrial pig barn. After twenty minutes of taking photos, hands shaking, eyes round with disbelief, I told the seasoned investigators I was with that I’d gotten what I needed, and was ready to go. They looked at me quizzically. “No,” one replied sympathetically, seeing the terror written across my face, “we’re here all night.” 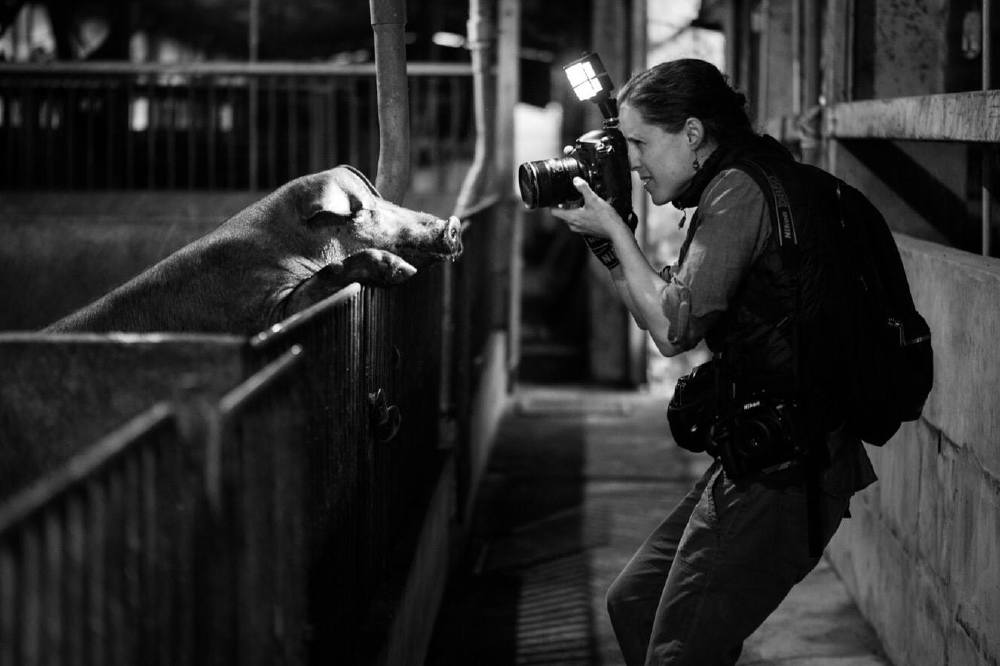 I thought that there was no way that I could endure it. Emotionally, physically. But we stayed. We documented every room, every injury. The dismembered piglet tails all over the floor, the castration wounds, the dumpsters of dead animals, the filth, the fear, the palpable suffering.

We stayed all night, as I subsequently learned to do during the investigative work that I carry out to this day. As to that first night, the images were used in a country-wide public awareness campaign, and shifted the needle on welfare standards in pig farming. Because I make all of my images available for free to any person or non-profit advocating for animals, those images have additionally been used in campaigns worldwide, to expose the cruelty inherent in industrial farming.

The danger in this work, however, is inherent. Investigators, who are often trespassing in order to obtain proof of what goes on behind closed doors, often get caught, threatened, beaten, detained, and jailed for their actions. Though I’ve had my share of near misses, I’m just plain lucky that I’ve been safe so far. Honestly, I hate the whole experience on investigative work. I’m horrified by what I’m seeing, and scared of getting caught. The stakes are high. Part of the experience of being an investigator, for me, is simply managing the flight response, and then the come-down from the all-nighter on adrenaline, which is deleterious to one’s long-term health.

Worst of all is that I’m meeting animals that I can’t help. I’ve now crossed paths with many millions of animals. It sounds impossible but it’s true. For example, chicken and hen farms today hold hundreds of thousands of birds on a single property, and I’ve been to many of these. I get to leave, but they don’t. It’s always painful, but I find catharsis in the action that I’m able to take with the images I’ve made.

My job as a photojournalist, which is really my mission in life, is to make the lives of animals visible. Seeing is one small piece of the puzzle when it comes to creating impactful change for animals. There’s nowhere I’d rather be than here, making productive use of my skills within the world of media and the animal advocacy movement.

Going up against economies, industries, and deeply rooted carnism is definitely an uphill battle for us within the movement. For front-liners and investigators like myself, it can all become so exhausting and demoralizing. It’s not surprising that people really battle with hopelessness. VINE Sanctuary founder pattrice jones says, however, that hope is not a thing you feel, but a thing you do. I find hope in the act of putting one foot in front of the other, in another person reached, and another image published. I focus on progress, and on the good. Hope is something I do.

The animal advocacy movement is an exciting and historical place to be. There’s so much room for innovation and critical thinking. Everywhere you look, there’s burgeoning entrepreneurialism, tasty new plant-based foods, and advancements in professional fields such as law and medicine, all of which lead to the better lives for animals, and fewer animals being consumed.

Within my field of photography, I’ve had to figure out how I can make a living while also making sure that all of my animal work is available for free to anyone needing strong images for their advocacy. It’s been exciting to build a project into a not-for-profit model that is supported by grants and donations. What was once just my photography project, We Animals, has become a small but mighty agency, called We Animals Media, dedicated to telling the stories of animals at a much greater capacity. We are now a team of specialists in communications, film, photography, and writing. To date, we’ve made over 12,000 images and videos available for free on our We Animals Archive, which is used the world over. Our goal is to continue to do better, reach farther, and engage the media in covering these important stories.

There’s so much good work that can be done. There are so many individuals stuffed into cages in factory farms, and fur farms, and animals languishing in labs. I live with such a sense of urgency, and a sense of responsibility that while I have the privilege of being on this earth, I have a duty to help others. We humans perpetuate the mass suffering of animals, and I’ve seen it with my own eyes. I take the photographs which allow others to see as well. I’m glad that I can do my part. As to the work that any of us can do on behalf of others: whatever it is, whatever your skills are, just begin it now. The animal world needs your help, your care, and your contributions.

Seven tips for vegans during lockdown