Thomas Cohen was "not surprised" when he found his late wife Peaches Geldof's body and desperately tried to keep a routine with their children - Astala, four, and Phaedra, three.

Thomas Cohen was "not surprised" when he found his late wife Peaches Geldof's body.

The 26-year-old musician lost his wife in April 2014 after she passed away from a heroin overdose and he now admits trying to keep a routine with their children - Astala, four, and Phaedra, three - only an hour after her death helped get him through the heartbreak.

He said: "When I found her, I was not surprised. I thought to myself at the moment, 'Yes of course - you had to do that.' What I can remember, it must have been an hour after I found her, that it's time for the kids' lunch.

"They needed their lunch. So I took the children's chairs to the table, took the yoghurts out of the fridge, the bananas ... After that, we drove here."

And despite the tragedy that rocked his family, Thomas says the children are "miraculously having happy childhoods".

He told German newspaper Bild: "[They are] miraculously having happy childhoods ... The routine I had to keep up with the children helped me a lot. They have lived longer than they knew their mother. They were just one and two years. Now they are four and five."

Meanwhile, Thomas previously admitted he was constantly "scared" throughout his marriage to Peaches.

He said: "I think any time you love someone, you're slightly scared of it. But when they have addiction issues and the border of life and death is so constant and close and intertwined throughout the whole thing, it's heightened. But that doesn't take away from any of the experience or relationship."

Thomas penned a "brutally honest" track, 'Country Home', about finding Peaches' body in the hope it would "transform the pain" of her death.

He added: "I just wanted ... God, no, it was the last thing I wanted to do, but I needed to somehow transform that pain.

"There's not much poetry to it. It's just brutally honest. But once I'd finished the song, it was mixed and we rehearsed it a few times, it just felt like a song. I'm not really reliving something every time I hear it." 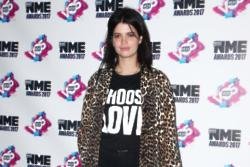