Pirate movies are always the most nostalgic.

If you're struggling to find your sea legs and throw yourself into International Talk Like A Pirate Day, we have the perfect selection of movies to get you in the mood. Now there's no excuse if you go the rest of the day without exclaiming "shiver me timberrrs"!

Key quote: "You're not just a fisherman! You're not just a fisherman!"
Without doubt the most hard-hitting pirate movie on our list simply because it is a true and comparatively recent story, Captain Phillips starring Tom Hanks details the exploits of merchant mariner Captain Richard Phillips, whose ship - the Maersk Alabama - was hijacked in 2009 by a group of Somali pirates off the Horn of Africa. Miraculously, none of the crew were harmed, though three of the pirates were killed and their leader Abduwali Muse was sentenced to prison.

Key quote: "Why is the rum gone?"
The first of five movies (so far) starring Johnny Depp as the infamous Captain Jack Sparrow. Disney based the movie series loosely on the theme park ride of the same name, and the first sees the dishonest yet heroic Jack on a mission to reclaim his ownership of his ship the Black Pearl, which is over-run by mutinous undead pirates led by Captain Barbossa. Aiding him in his mission is rag-tag team of miscreant seafarers, not to mention a blacksmith who is determined to rescue the beautiful governor's daughter from the pirates' clutches.

Key quote: "My name is Inigo Montoya, you killed my father, prepare to die!"
A cult classic adapted by William Goldman from his 1973 novel of the same name, this swashbuckling adventure has so many twists and turns and it's not always easy to work out who the bad guy is. A young farmhand named Westley is believed to have been killed by the Dread Pirate Roberts, though in actual fact he is alive and well and determined to rescue the love of his life, Princess Buttercup, from the clutches of three outlaws and, ultimately, her new fiance Prince Humperdinck.

Key quote: "Goonies never say die!"
This 80s favourite doesn't feature pirates so much as gangsters who behave like pirates, terrorizing a group of young children (played by the likes of Sean Astin, Josh Brolin and Corey Feldman) who are on a mission to retrieve a hidden treasure belonging to a famous pirate named One-Eyed Willy in a bid to save their homes from foreclosure. It's one of those timeless, nostalgic movies that people want to revisit over and over again.

Key quote: "Nobody calls Pan a coward and lives!"
Certainly one of the most famous children's stories of all time, let alone pirate story, J. M. Barrie's Peter Pan has been adapted to film numerous times - the most famous being the 1953 Walt Disney animation. It's the story of a boy from Neverland who never grows up and invites three children from London on an adventure with his friends Tinkerbell and the Lost Boys where they encounter Peter's arch-enemy Captain Hook; a pirate with a hook for a hand and a deadly fear of crocodiles.

Key quote: "I'm not a pirate. It so happens I am a lawyer."
Directed by Steven Spielberg, Hook is a sequel to the Peter Pan story we all know and love, focusing on the now grown-up Peter Pan (or Peter Banning as he is now known, portrayed by Robin Williams) who is now a lawyer and has long forgotten his Neverland childhood. That is until Captain Hook returns to torment him, kidnapping his children and forcing Peter to confront his past and come back to Neverland. Along the way he learns to become a better person and a more loving father.

Key quote: "Well, it could be worse; we could be stuck in the audience."
Robert Louis Stevenson's 19th century tale Treasure Island is the landmark pirate story responsible for the way pirates are still viewed today. It saw the invention of pirate tropes like X-marks-the-spot treasure maps, the Black Spot, deserted islands, peg-legs and parrots. It has been adapted to screen plenty of times, but the best has to be Muppets version starring the likes of Tim Curry, Billy Connolly and Jennifer Saunders. 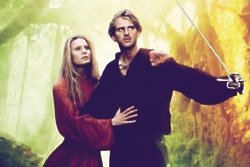 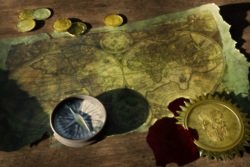 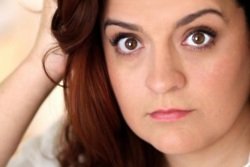