Confessions of a Shopaholic Facts

Confessions of a Shopaholic

Sophie Kinsella's Shopaholics book are just the latest in a long line of novels to get the big screen treatment.

Starring Isla Fisher and Hugh Dancy Confessions of a Shopaholic In is an upbeat and deliciously funny film. Becky is the kind of heroine that everyone (at least most of us) can identify with. She is fun, friendly and engaging. But shopping, we rapidly discover, is her Achilles heel.

There is just no stopping this woman, not even credit card debt that is potentially crippling.  Because of her shopping addiction, she's constantly getting into messes. And the irony of the story is that this profligate young woman is a financial journalist, (having previously worked for a gardening magazine) who ends up dishing out financial advice to readers.

1. The film shot inside of some of the most exclusive stores and boutiques in New York, including Barneys New York flagship store on Madison Avenue, Henri Bendel on Fifth Avenue, Scoop and Catherine Malandrino in the Meat Packing District, Alessi (upscale housewares) in Soho, and Kleinfeld (elaborate bridal shop) in Chelsea.

2. The film also shot inside some of the most historic buildings in the city, including legendary British architect Lord Norman Foster's Hearst Tower (the only film to ever be allowed to shoot there) on 57th Street and 8th Avenue; 45 Rockefeller Center (the building that features the statue of Atlas holding up the world at its entrance); the Grand Salon inside of the 1931 Jumeirah Essex House hotel on Central Park South; inside and out of St. James Church (1884) on Madison Avenue between 71st and 72nd Streets; inside of the Beaux Arts and Art Nouveau styled Emigrant Industrial Savings Bank Building (1908-12) on Chambers Street in the Wall Street district; utilizing the exterior of St. Anthony of Padua on Sullivan Street at the intersection of Greenwich Village, Tribeca and Soho, founded in 1866.

Excited New Yorkers thought that actual stores had opened on the ground level of the Tower and were sorely disappointed to discover that they were only for the movie.

4. Across the street from St. James Church, windows were re-dressed in actual Yves St. Laurent, Asprey and Sonia Rykiel stores for the film's climax.

6. To create a lavish display in Henri Bendel's six-story atrium, as well as window decorations, production designer Kristi Zea and supervising art director Paul Kelly had to bring in a full complement of their department to pull an all-nighter with military precision, as they only had enough time between the store closing its doors to the public and reopening them again in the morning to pull off the impossible.

Mission was accomplished, with legions of New Yorkers admiring the results before the cameras began rolling later that day.

8. Ed Helms of "The Office" is seen only on videotape in the movie as self-help money management guru Garrett E. Barton.

9. A bank loan officer is portrayed by Jonathan Tisch, Loews Hotel Chairman and CEO; and in a publishing reception scene filmed in Chicago, another banker is played by Andy Serwer, managing editor of Fortune Magazine.

10. Robert Stanton, who plays ruthless debt collector Derek Smeath, drew upon the only other job he ever had besides actor: a skip tracer for a student loan company, finding people who had defaulted on their debts.  Stanton admits that he wasn't good at harassing people, since he would always burst out in laughter instead.

11. Sophie Kinsella was on the "Confessions of a Shopaholic" set nearly every day as both associate producer and consultant, ensuring that her beloved creation of Becky Bloomwood came fully alive on screen.

Not so coincidentally considering the massive international sales of the "Shopaholic" novels, Kinsella was often approached by excited fans on New York, Connecticut and Miami locations as if she were more of a movie star than an author.

Confessions of a Shopaholic is released 20th February 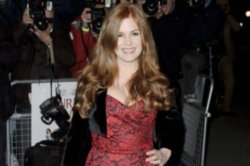 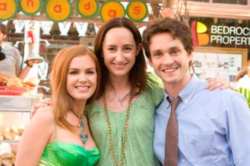 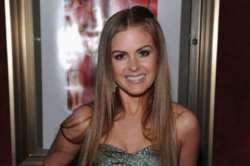