If you love an action packed cop drama than you need to look no further than The Sweeney this autumn.

The much loved seventies TV series has been given a 21st Century remake as Ray Winstone and Ben Drew are set to star.

And we have a series of clips from the new movie for you to sit back and enjoy:

Winstone is back on the big screen kicking some ass with this role as he takes on the role of Jack Regan while Ben Drew aka Plan B is set to play George Carter.

Drew made his directorial debut earlier this year but The Sweeney looks set to be the biggest acting role of his career to date - this could be a movie that really does establish him as an actor.

And an all star support cast has been assembled for the film as Hayley Atwell, Damian Lewis, Paul Anderson and Alan Ford are all on board.

The movie also marks the return to the director's chair for Nick Love in what is his first movie since The Firm back in 2009 - he has also penned the script.

Set in present day England, The Sweeney will be packed full of fast cars, action and wise cracks as it follows Flying Squad detectives Jack Regan, George Carter and their team, as they work to keep the bad guys down! 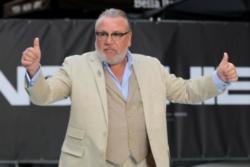