Anna Kendrick is already known for her unique range. Even so, the role of Stephanie in A Simple Favour was something completely different for her. Stephanie might share some qualities with Kendrick, such as her exuberance and her everywoman amiability, but there is much more to the performance as Kendrick brings all at once a flair for mischievous humour, emotional complexity and an unleashed fierceness. For director Paul Feig, there was simply no other actor for the part.

“I love all [of] Anna’s performances, but I especially love her when she plays people who are sweet and helpful and candid—and that is Stephanie. Every time she’s on screen, you just fall in love with her,” he observes. “And yet... she also has this really acerbic side, which is hilarious, so I knew Anna would make sure Stephanie isn’t a pushover.”

He continues: “Stephanie goes through the biggest transformation in this movie because she starts out as what we think is the perfect mom, but when she feels screwed over, that's when she starts to crack open and take on the best attributes of Emily—the drive, the ambition, the not-taking-no-for-an-answer. She becomes more skeptical of human nature and uses it to good effect. What I love in Anna’s work is that, by the end of the movie, you really feel she has taken herself to a new place.”

Kendrick sunk her teeth into a woman who seems to be all about the scrumptious, the cute and the fluffy, but is suppressing a deep abyss of fears, regrets and emotions that must be confronted.

Producer Jessie Henderson says: “Anna was really truly impressive to watch every day as she became Stephanie. She has all these amazing micro-expressions that can say so much. She’s so warm that you gravitate towards her, but she carefully reveals Stephanie’s inner cracks in a way that is at once nuanced and thrilling.”

It was Feig who convinced Kendrick to throw herself into the complicated role. She says that as soon as they started talking, “I knew A Simple Favour was going to be a genre-bending film.”

She also liked that within all that genre fluidity, the lives of women are front-and-centre. “Women have such layered, complicated, confusing relationships, so it’s great to have a chance to really explore that in such an exciting thriller.”

For Kendrick, the pleasure of playing Stephanie was digging into all that is going on beneath her happy-go-lucky, public social media persona. Kendrick notes that much as she plays at being a detective once Emily vanishes, she’s also just a lonely, anxious single mom with a past she desperately wants to keep locked away.

“Stephanie is upbeat and always seeing the bright side, so she can be a little insufferable,” Kendrick laughs. “But I think there’s also a real sadness to her because really, she’s so lonely. When it comes to her relationship with Emily, she’s willing to put up with a lot of abuse because it’s preferable to her loneliness. And Stephanie also wants validation from Emily. I think that’s something a lot of women experience to some degree in some friendships.”

The space that Feig gave Kendrick to explore Stephanie’s many nooks and crannies opened up the performance even more.

“It was so great working with Paul because he makes you feel like you can’t fail,” she says. “You can try anything and he sees the value in it, so it’s a really freeing experience.”

Another high point for Kendrick was forging that charged and complicated rapport with Blake Lively.

“In real life Blake is so sweet, open and warm so it was amazing for me to witness her showing off her funny, dark side as Emily,” says Kendrick. 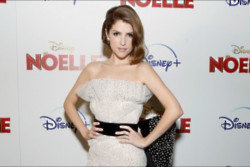