This week’s theme for the FOTW series is another unseen film for our staff writer Melissa Allen, but it is also a Christmas/Horror film, so fitting for the month of December.

Krampus (2015) follows a family who welcomes their unruly relatives into their home, only to find that their dysfunction and lack of holiday cheer will be their undoing… 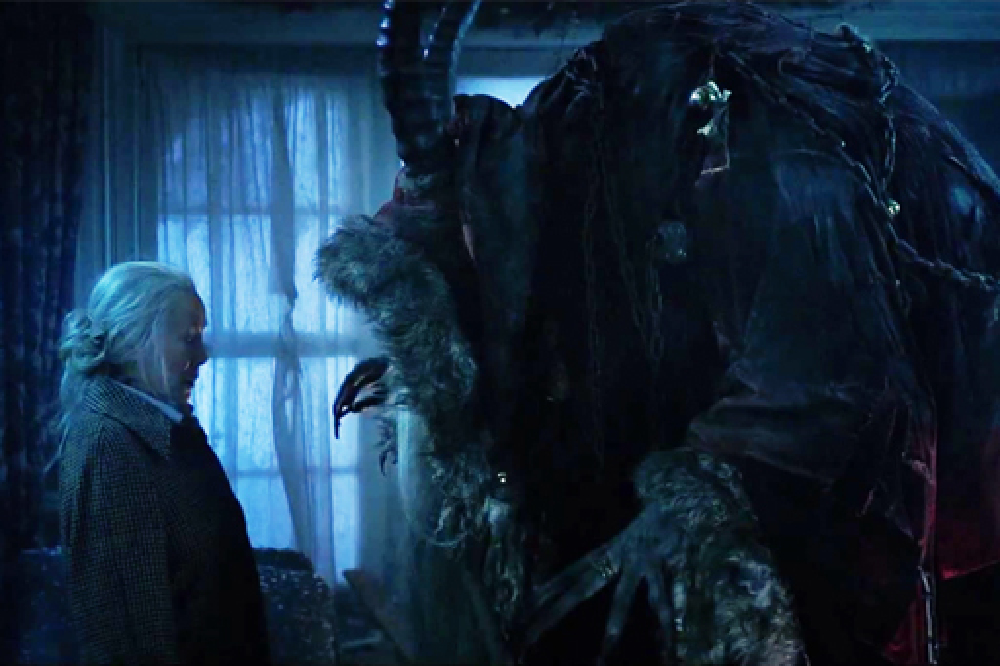 The Engel family open their home to Sarah’s (Toni Collette) sister, Linda (Allison Tolman). Sarah, the mother, is slightly on edge from the lack of appreciation regarding all the decorating and cooking she has done for the family – her mother keeps making comments and Sarah is on the verge of losing it throughout the first few scenes of the movie.

While Beth walks to her boyfriend’s place, she sees Krampus on the roof of a nearby house – she expectedly runs for it and dives under a delivery van parked on the side of the road. But this is not enough to protect herself, and Beth is the first to go.

Krampus chases her by jumping from one house to the next as we get a side-view camera angle, which looks rather good.

Following this, the rest of the film begins to deteriorate – which is unfortunate as the concept of a Christmassy horror film is quite interesting.

Krampus does not execute this idea well and as a viewer, you spend almost two hours wondering why everything that is happening, is happening – and not out of confusion, but out of astonishment at how this film got made.

There’s nothing worse than a cheesy film that tries too hard and ends up being appalling, rather than a so-bad-its-good flick, which was the case for this film - it's just awful.

With this said, Collette’s performance was the highlight – if you were forced to pick one out. The dialogue in the film wasn’t the best either, but she worked with it and did the job well.

Speaking of the script, out of every cheesy line and frankly unrealistic dialogue in the face of an approaching demon, there is one line that is unforgettable – and not for the right reasons.

In a scene where the families are holed up in the living room, they all hear rather loud banging and scratching coming from upstairs. Sarah, trying to calm down the kids, states that it’s 'just squirrels up there'… even badgers would have made more sense but there we go.

But then, Sarah and Linda’s mother Dorothy (Conchata Ferrell) says that maybe they’re “playing with their nuts.”  Why anyone thought this line and its poor delivery were a good idea is anyone's guess.

Every horror film has someone that isn’t so smart, right? Someone that suggests splitting up, or taking down barricades for some unbeknown reason. Well in this film, that role falls to everyone.

One hilarious example is when a character decides he wants to find out what happened to his son and other family members who have gone missing, and jumps onto the back of one of the creatures – never to be seen again (obviously).

Despite the things that are wrong with this film, which is essentially everything, the design of the character Krampus and his minions was actually rather good.

Whoever designed these creatures is the real MVP of this film. The freddy-fazbear looking teddy that attacks Linda is really well-designed and looked great, and actually rather creepy. The grossly long creature with what looked like a child’s play-tunnel for a body and a giant doll head was surprisingly horrifying also.

Krampus itself is also well-executed. His hunched, sunken dead eyes, and mouth filled with rotting teeth always agape was brilliant and the creature dominates the screen whenever we see him. Despite the movie itself not doing a great job with scares of any kind, the design of this creature brings us close to creating some type of horror.

This is unfortunately where the praise ends. Another creature we see is an evil gingerbread cookie – which in one scene is suspended from a chain with a hook on the end hanging from the family’s fireplace. This attracts one of the children as he grabs the cookie and takes a bite… no wonder he got swept up the chimney…

This film feels like when you make something and then look at it and think ‘good enough’, and just leave it as it is. It is unclear if this film was meant to be taken seriously which is not a good sign.

Obviously, films that include aliens and the like are not real, but they use realism to gain the horror aspect and scare the audience. Krampus utilises evil cookies and a cult-gathering where the ground breaks apart to reveal lava, right in the middle of a suburb… this film does not invoke realism at all.

Sometimes when you watch a film you dislike; you can still appreciate why others may like it and admire the hard work and love that went into it. This is impossible with Krampus.

While you want to enjoy it due to its outlandish plot – it is very difficult to do so. The whole film feels like a mixture of weird ideas- none of which were rejected.

Unfortunately, Krampus is well below-par and usually, even with unimpressive films- they can be worth the watch due to the movie’s message or actor's performances, but sadly this film is one to avoid.