Saw VI revisited: The beginning of the end

We’re more than halfway through our revisitation of the Saw franchise now, ahead of the release of the ninth instalment in the series next week (May 17th, 2021).

Today, we’ll be focusing on the 2009 release Saw VI, which started to look like the beginning of the end for the characters we’d come to know and love (or love to hate).

With a budget of $11 million, the movie brought in a disappointing $68.2 million at the box office, confirming that it was time to wind things down.

Patrick Melton and Marcus Dunstan returned to write the screenplay for the horror, with Kevin Greutert serving as director.

Where do we start things off? 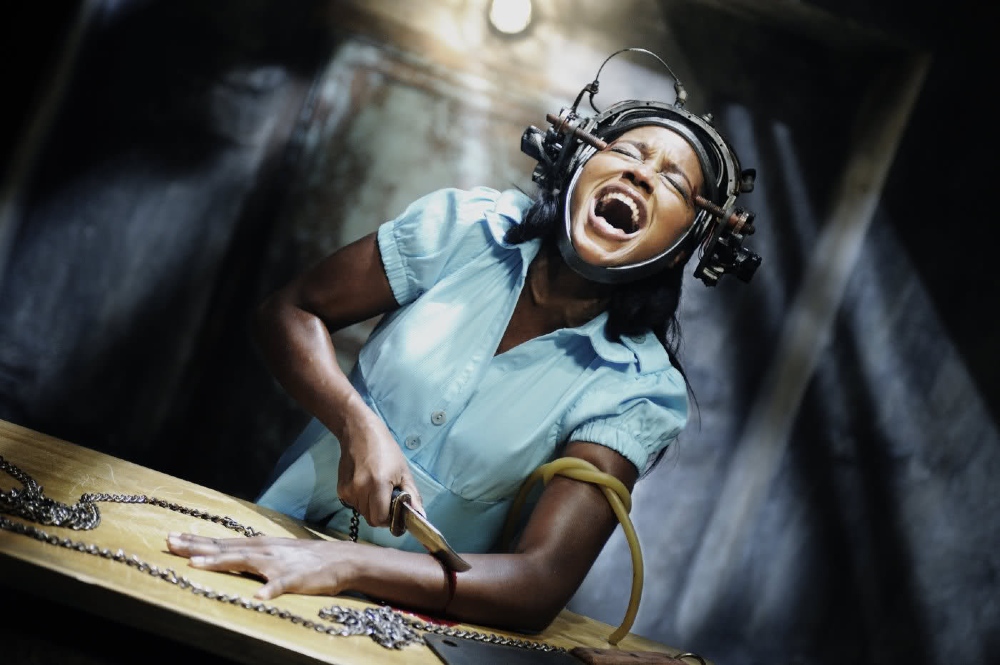 The first trap we see in Saw VI is a brutal one / Picture Credit: Lionsgate Films

Going back to the traditional way of kicking off a Saw film, we see two individuals, revealed to be predatory lenders, wake up in a room with a helmet secured onto their heads which include screws aiming at their temples.

They are told that only one of them can survive; the person who can cut off and sacrifice the most flesh in 60 seconds, throwing whatever they give onto a scale. The loser will see the screws pierce their skulls, bringing their life to an end.

Whilst the overweight male contender gets the upper hand at first, cutting away the flab from his stomach, the woman makes an even bigger sacrifice when she chops off her entire arm. This results in her survival and the man’s death.

When the crime scene is later found, Detective Mark Hoffman (Costas Mandylor) arrives after being called in by Special Agent Dan Erickson (Mark Rolston). He informs him that the fingerprints of Special Agent Peter Strahm (Scott Patterson) have been found at the location.

He also tells Detective Hoffman that he had lied about Special Agent Lindsey Perez's (Athena Karkanis) death, hoping to keep her safe and undercover until John Kramer's (Tobin Bell) Jigsaw Killer accomplice had been found. The group then agree to work together in further investigations with the case.

Later on, Detective Hoffman visits Kramer’s ex-wife Jill Tuck (Betsy Russell) at her workplace, where she hands him five of the six envelopes she received from Kramer’s will, in the lockbox we saw her opening up in Saw V. The envelopes contain details of the participants involved in the next game. Detective Hoffman tells her that this is the last time they will see one another and that this game is one he will handle alone. 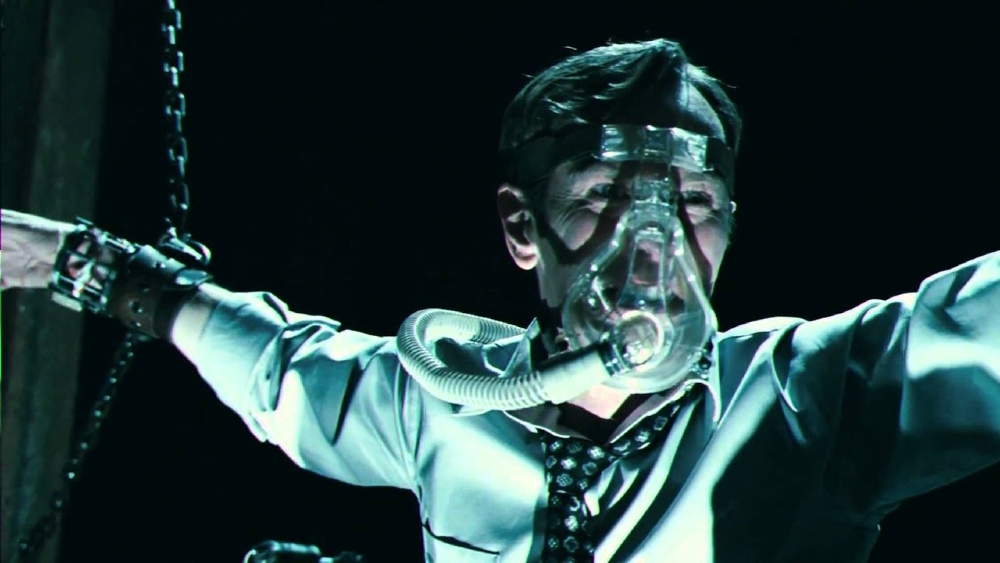 Easton wakes up in his first of four tests / Picture Credit: Lionsgate Films

Through flashbacks, we discover that Kramer had his own health insurance plan through the company, but had been denied coverage when he wanted to undergo experimental surgery that had a slim but real chance of saving his life. We also learn that Easton had come up with a formula which ensured he only offered coverage to those who would likely never need to use it and employed a team to try and find discrepancies in agreements if any claims were ever made.

For his first test, Easton is trapped in a vise-like contraption with a breathing mask on his face. Opposite, he sees his janitor Hank (Gerry Mendicino) placed in a similar device. The pair are told via a video recording of Kramer that whoever is able to hold their breath for the longest, will survive. Every time they take a breath, the vises surrounding their bodies close in, crushing their chests.

Kramer also explains how Easton has four bombs strapped to his limbs - one on each of his arms and one on each of his legs - which will explode at the end of a 60-minute countdown if he fails to claim the keys at the conclusion of each test.

Though he is injured, he manages to last longer in the trap than his former colleague, escaping and removing one of the devices from his body, before moving onto the next room.

In there, Easton must pick up the ends of two chains which are connected to two platforms. A light comes on behind a glass screen, showing his file clerk and his secretary standing on one of the two platforms each. Both have a noose made of barbed wire wrapped around their necks.

Easton is told that he must let one of the two live whilst the other dies, letting go of the corresponding chain and watching his colleague be hanged. He’s given the health and family history of each, to prove that it shouldn’t be as simple as his insurance policy ‘formula’ to choose who gets to live and die.

After making his decision, he removes another bomb from his limbs before moving onto his third test, which involves his company’s attorney, Debbie (Caroline Cave). 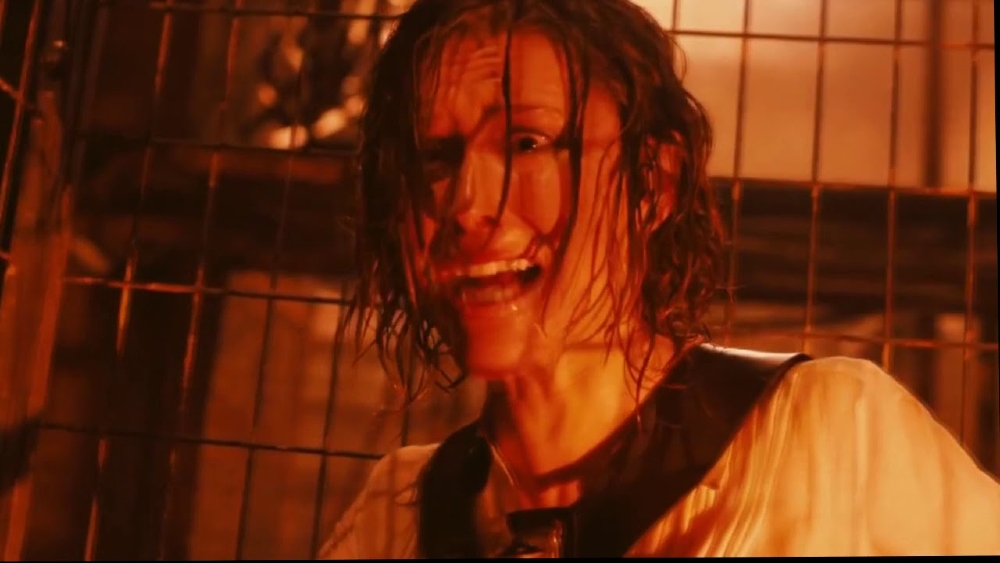 One of the traps sees Easton's colleague stuck in a maze / Picture Credit: Lionsgate Films

She's trapped in a maze in the zoo's boiler room, and has just 90 seconds to make it through before a device strapped to her head shoots a spear straight up through her brain. Her path is blocked however, by pipes emitting extremely hot steam. Easton is able to stop the steam by pulling levers, but that forces the steam to be redirected and blasted onto his bare skin. Still, he is successful and his colleague reaches the end of the maze.

There, she finds X-ray images of Easton’s stomach, realising that the key to the device around her neck has been sewn into his stomach. She grabs a buzz saw and tries to murder Easton, but he manages to fight her off until the device triggers, bringing her life to a close.

After removing his third bomb strap, Easton reaches a room where the six associates he had tasked with finding reasons to deny health insurance coverage strapped to a carousel. He’s told that he can only save the lives of two of them; the other four will be killed with a shotgun strapped to a mechanical device. 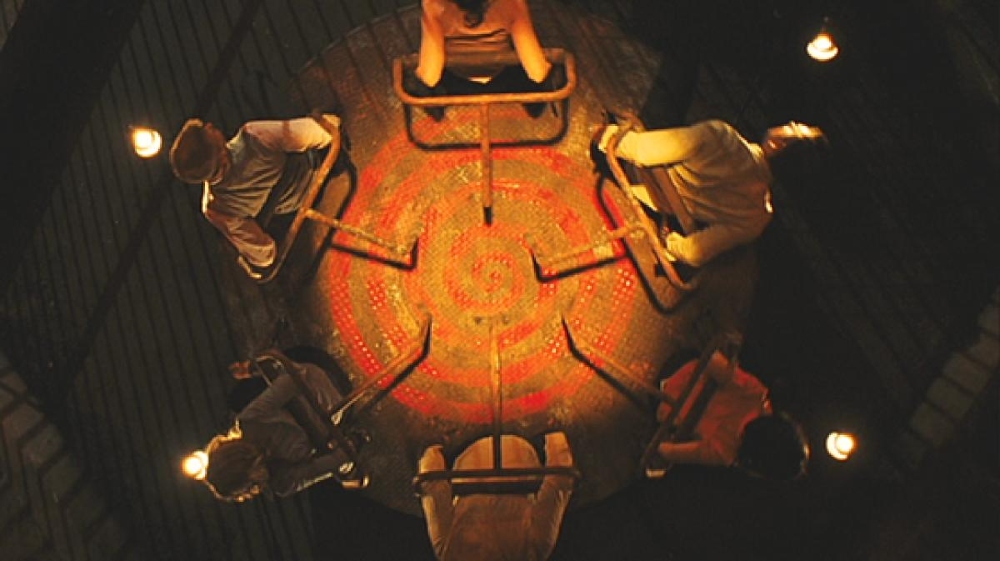 To save two of the captured colleagues, Easton must put his hand into a mechanical device and press two buttons at the same time, which causes his hand to be impaled by a spike. When he’s made his choice and saved the lives of two of the women on the carousel, he receives his final key and moves into another room before his time runs out.

As the game takes place, Agents Erickson and Perez are called into a meeting with the pathologist who has been examining the corpse of a recent Jigsaw victim. He tells them that the jigsaw piece-shaped bit of flesh that has been removed from his body was removed with a knife different to the rest of the victims, apart from Seth Baxter (Joris Jarsky) who we learned in Saw V had been murdered by Detective Hoffman. This leads to the pair asking for the tapes in each of the cases to be examined, as the voice could lead them to yet another Jigsaw accomplice. 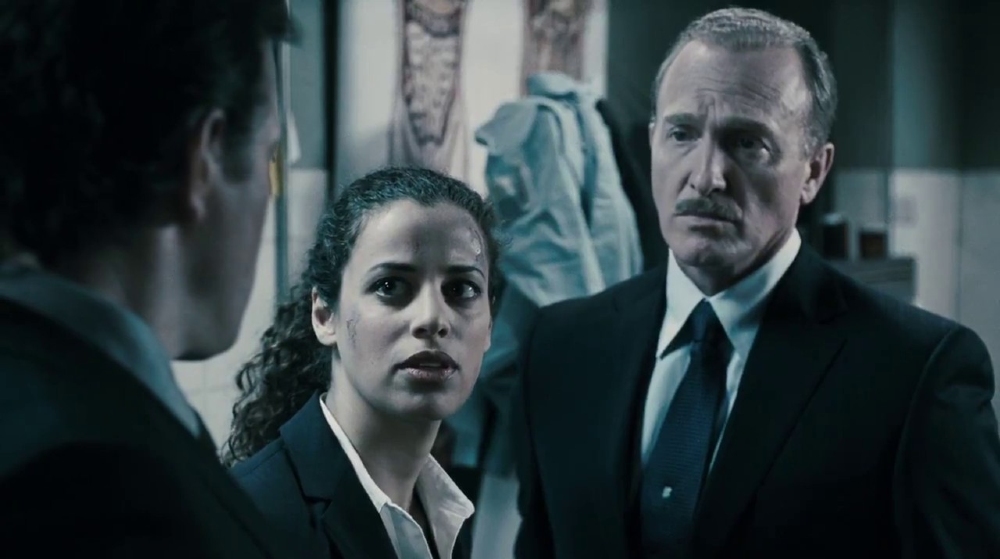 Arriving at the lab, where work is being done, Detective Hoffman is also called in alongside the two agents. He looks a little panicked as the technician gets closer to revealing the truth, with both Agent Erickson and Perez putting pressure on Hoffman as their suspicions are raised. Then, the tape is restored and Hoffman is identified; but he quickly moves into action and kills everybody in the room.

Flashbacks then reveal that Detective Hoffman had taken the only remaining part of Agent Strahm’s body following his crushing trap - one of his hands - using his fingerprints to frame him at each of the crime scenes they were later found. In the present day he uses the hand once more, planting fingerprints around his lair before setting it on fire and fleeing the scene.

Elsewhere, we see Tuck find the letter that Detective Hoffman had left for Amanda Young (Shawnee Smith); the one we saw her reading all the way back in Saw III but didn’t know the contents of. It is revealed that Hoffman had been blackmailing Young, as he found out she had been with the addict who caused Tuck to miscarriage following his robbery at her clinic. He told Young that he was going to tell Kramer about her involvement unless she killed Lynn Denlon (Bahar Soomekh).

Tuck takes the letter along with a reverse bear trap to the zoo, where Easton's game is taking place. She puts the trap on a shelf and places the letter in Detective Hoffman's surveillance room.

When he later enters the room to watch the final part of Easton’s game, he is surprised when he finds the letter on his desk. Tuck then appears, electrocuting Detective Hoffman and strapping him into a chair.

Easton meanwhile comes face-to-face with two cages in his final room. Trapped in one of them is his sister, whilst in the other are the widow and son of one of his former health insurance clients, whom he denied coverage to and so refused to try and help save his life.

A tape of Kramer begins to play, which tells the widow that it is her decision whether she forgives Easton, or wants him to die, just as her husband had to because of his callousness. Though she looks to want to kill Easton, she can’t bring herself to do it. Her son however, is a different story. He pulls a lever, which sees a metallic grid swing down and pin Easton up against the walls of the cage. Acid is then injected into his body, resulting in his slow and painful death.

Detective Hoffman wakes up, watching it take place whilst Tuck places the reverse beartrap onto his head. Through a flashback, we learn that Tuck’s sixth envelope contained Detective Hoffman’s details, with Kramer hoping he would also have to be tested one day. 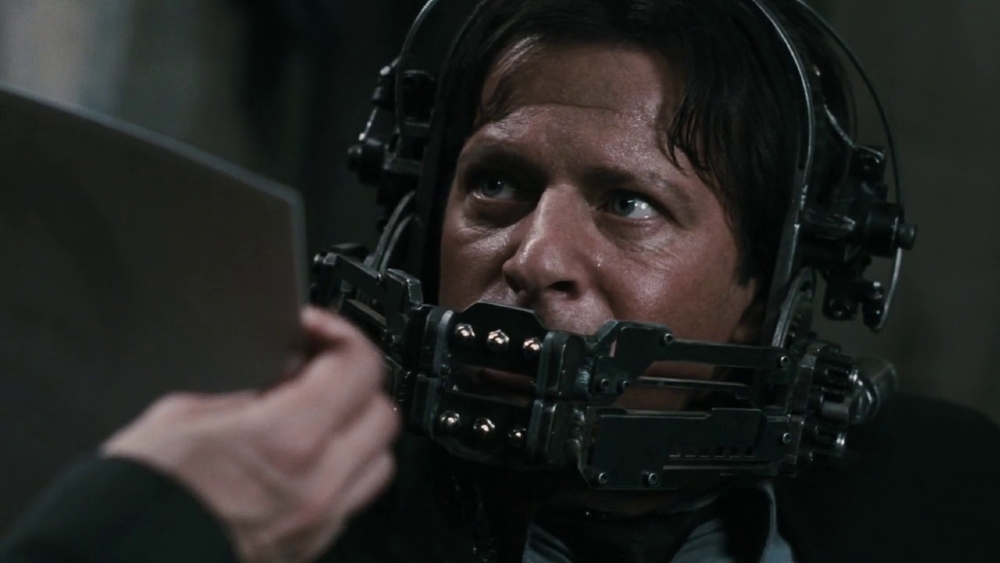 Tuck flees after telling him “game over”, but Detective Hoffman has the will to survive. He smashes the trap against his hand, breaking the bones so that he can wiggle out of his restraints, before using the bars on the door to stop it from fully engaging when it reaches the final moments of its countdown.

He wriggles free of the trap, ripping part of his cheek off in doing so, before the credits roll. 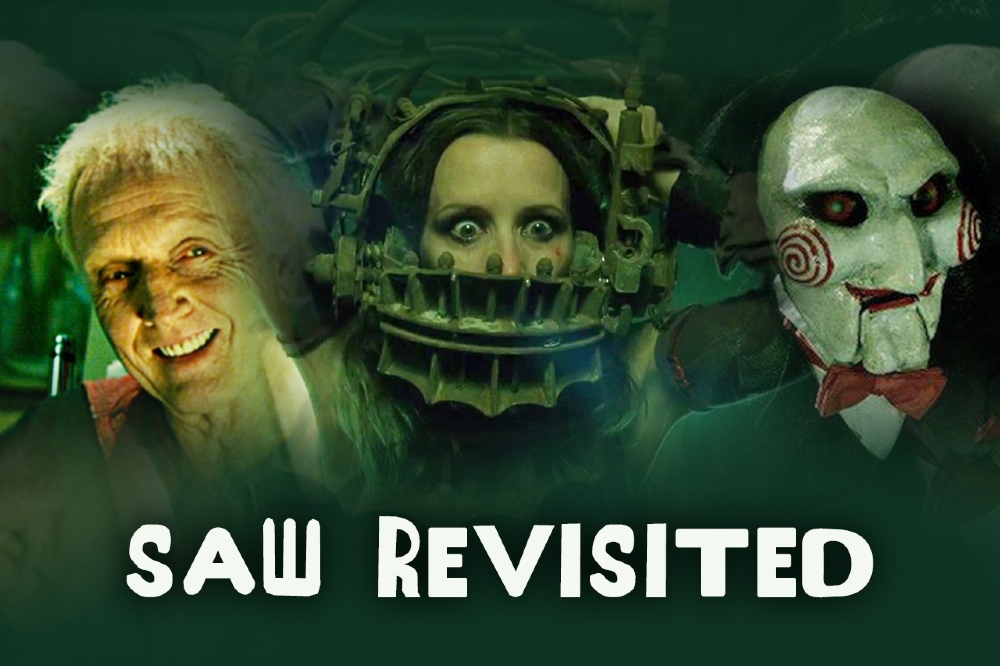 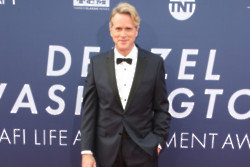 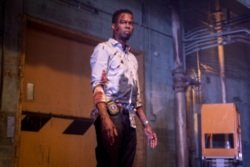 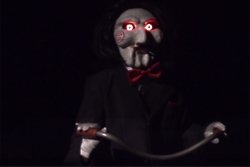 Jigsaw revisited: The Saw franchise is brought back from the dead