Meet Rachel Lowe the mum Behind a Gaming Sensation

When you think of strong, independent and forward-thinking mums, Rachel Lowe should come to mind.

Rachel's idea for 'Destination' board games has been a uge success

The mum-of-two, to daughters Hannah and Lauren, was 18 when she first entered parenthood. Rachel was determined to make her mark and sure enough the business entrepreneur has worked hard, pushed boundaries and come out on top.

She’s been through highs and lows, gained success, had losses and still managed to come out fighting. Her best-selling board games Destination toppled Monopoly off the number one spot in stores like Hamleys and Harrods and she was also one of the first people to go on BBC2’s hit show Dragons’ Den. Now she’s back with a new brand that is all about celebrating women’s lifestyle. Here, she talks to FemaleFirst about her struggles, achievements and new business ventures.

Looking back to when you were 18, you had just become a mother for the first time, decided to start University in Portsmouth, studying Law and take on a cab driver position – sounds chaotic – how did you cope and when did you get the time to develop your ideas for the Destination game?

“I didn’t really think about it as being chaotic, you just get on with it and I enjoyed my busy life. I had to make the most of each day by fitting in as much as I could. I would plan my day around work and university. So I would take the children to school and nursery, go to my lectures at university then go to my office, which was at university, and run by business inbetween. Then in the evenings I’d do my cab driving – I mainly did weekends on the taxis so it wasn’t every night.

“I had no problem at all being a cab driver, there’s nothing wrong with cab driving, and you meet lots of different characters when you’re out driving but I knew it wasn’t my career. I wasn’t going to do that forever.

I feel that this experience has showed the girls that you can fall down but you can get back up again and you can keep going and I think it’s made all of us stronger.”

And did you want to get into Law?

“That was the plan. I always said that I wanted to be a barrister and get paid to argue – to speak quite honestly.”

You went on Dragons’ Den to pitch the idea for Destination. Do you think you were fully prepared or is there anything more you could have done?

“Yes I was completely unprepared I had no idea what I was going in to and I just thought it was an investment programme. I hadn’t seen the programme before and after I had done my pitch, which I thought I’d done brilliantly, I was expecting them to fall in love with the idea and all throw their money at me but of course they didn’t.

“It was more of an interrogation and it made really good television. It did unsettle me, I cried the whole way home, I was very upset by the experience but now I look back and I realise it didn’t do any harm because the exposure we got from the show was all positive, because by the time the programme was screened I had already been successful with Destination.”

What’s your advice to other Dragons’ Den hopefuls?

“Know the difference between gross and net profit, that’s what I was picked up on. Just make sure you know your numbers without a business plan in front of you.”

Gaming is such a tough industry to crack. What inspired your idea for Destination?

“Well I simply had the idea for the game when I was on my shift as a cab driver. Games allow communication and fun and whilst you’re in the game you don’t have to think about anything else going on in your life because you’re so focused on playing. It’s all good fun. 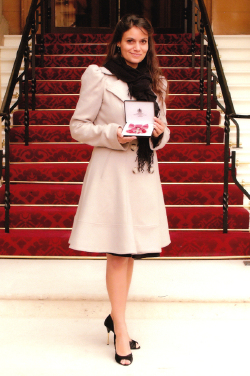 You were honoured by the Queen in 2009. How did that feel?

“When I actually went for my MBE it was Princess Anne that awarded it to me and she was lovely. They had done their background research and when she presented it to me she knew all about my cab driving, she knew all about the game and I was very impressed at how much she could have a conversation with me about. It was nice.”

“I met the Queen at a recognised woman in business event. It was recognizing the work I’d done promoting enterprise and education because I do a lot of work with schools. It was an amazing experience to take my girls and my mum to Buckingham Palace and be on the other side of the gates. It’s something that I will treasure for the rest of my life. I remember she [The Queen] said ‘What do you do’? I said, ‘I make board games’.”

The game sold out at Hamleys and was doing so well, did you ever think or were you prepared to lose it all – have you always been a risk taker?

“I’m always ever the optimist. The game had great success in Hamleys and I spent the next six years building it so no it never occurred to me that it would go the other way.”

Destination, as a business, went into administration. Was it harder for you to cope with this downfall as a mother or as a businesswoman?

“Both, because I personally suffered and got quite ill with not just losing my house and watching the company I’d spent six years building go down, but the children suffered as well. They lost everything too and they watched their mum who had previously been very confident, bubbly, outgoing and successful to being this very distressed, thin depressed person.

“I spiraled into a very deep depression and it wasn’t a very nice thing. I didn’t cope. My mum was helping me look after the kids and I didn’t leave the house aside from doing the school run and when I did do that I wore a hat, I wouldn’t look up to people. It was a horrible time to go through.”