Prince William is related to rock legend Mick Fleetwood it has been revealed.

New research shows that both Prince William and Prince Harry share blood with the Fleetwood Mac legend, through an ancestor on Princess Diana's side of the family.

Mick, 66, is a sixth cousin, thrice removed, of the royal heirs, according to the Daily Mirror newspaper.

Ancestry UK's Miriam Silverman, who conducted the research, said: "It seems like Mick Fleetwood was always destined to be famous with both royal and celebrity connections in his family tree."

British-born Mick - who was born and raised in Cornwall - moved to the United States in the mid-Seventies, where he found fame with Fleetwood Mac.

The band has had a string of hits including 'Go Your Own Way' and 'Dreams'.

The young royal family are currently enjoying some downtime at Queen Elizabeth's summer residence, Balmoral, and are expected to move into their new home on the grounds of Kensington Palace in London imminently. 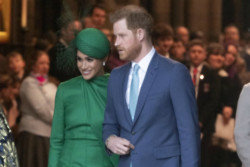 Duke and Duchess of Sussex visit Queen in Windsor