I share my thoughts on Hal Cruttenden's latest show Chubster.

I’ve only ever seen Hal Cruttenden on Live at the Apollo, but his segment was enough to whet my appetite to want see him in his own show Chubster on Friday night at the Pyramid Arts Centre in Warrington. Given the name, I was expecting the show to be about weight- which is always a topic that appeals to me as I am a self-confessed ‘chubster’ too. However, Hal explained at the beginning that he would touch on this topic briefly, but it was not a show about that at all. The name arose because he asked his daughters what his next show should be called, and they kindly offered this as a suggestion when he asked them what came to mind when they thought of daddy. And the tone was set for the evening.

I was relieved to find that the audience were game for an evening of fun- sometimes in a small venue like this- one drunk can spoil it for everyone- but he had a receptive crowd who were more than up for a laugh.

He poked fun at Warrington and playfully implied that certain members of the audience were crap parents or a little bit thick, but they all took it in good spirits and joined in with the banter.

Hal delves into many topics such as politics, family life, other comedians and most surprisingly- he talks a lot about death. But don’t worry- it doesn’t put a dampener on the evening- he has an incredible talent for turning something very morbid into a hilarious topic for consideration.

Much like Michael McIntyre, Hal is slightly camp which makes his delivery all the more impactful- as he is quick to laugh at himself too. Sadly, his microphone had a few teething problems- but he was able to incorporate his frustrations over the interruptions into his dialogue like only a true pro could.

I would happily go and see Hal Cruttenden again- he is a cheeky chap who covers all bases with his comedy- leaving every member of the audience with something to take away and enjoy in the moment.

Thank you to the Pyramid Arts Centre for the tickets in exchange for an honest review. Thank you to Hal for helping me to make some special memories- it gave me and my sister in law a well needed night off from the kids! 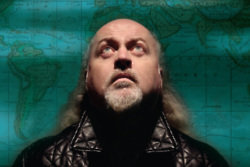