The ‘H’ artwork and the promo video for first single ‘Sleep’s Over’ come courtesy James Sutton, who has worked with acclaimed US rapper Kid Cudi.

It was in the mid-noughties that Garside began the two projects that continue to consume her to this day, Huski and solo project Maple Bee. She met Pike Galloway in 2006, and as Huski the pair released their first album ‘Love, Peace, Pain’ that same year, touring to promote it with Robots In Disguise, to much fanfare not least because of the latter’s connection with comedy troupe The Mighty Boosh.

‘H’ was originally intended to be a reworking of 2008’s fan-funded second album ‘Strangelove’, which was only made available to a few online, but has turned out to be a brand new collection. Despite the candy-coated synthpop of ‘H’, the themes are hardly chart-friendly: Huski are a deceptively intense affair.

As Garside, who works as a music therapist when not pouring out songs, puts it, 'We sound playful but generally the themes we deal with are quite dark'. 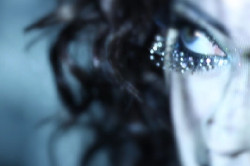