We chat to the ska legend about The Selecter, the riots and the ska movement.

We're completely split down the middle in terms of black and white in our band. I feel that it's a very strong message to put out there these days, what 2 Tone stood for.

2 Tone was standing for multiculturalism when the word hadn't been invented. In fact, the word racism had only just been invented at that time to define that feeling.

The gigs we've been doing, the festivals over summer, have gone very well. People seem to be into that message and the new music and the only was is forward really.

-What was it like being part of that movement on 2 Tone with bands like The Specials?
It was an exciting time. We'd all come to it from different backgrounds, but we found a unity in the message we were saying.

Those were days when you could be picked up for absolutely nothing, if you were the wrong colour skin. The law isn't there anymore but the same thinking is still around anymore.

That was what 2 Tone was suppose to be about, that's why it was called 2 Tone. We're more interested in the unity of black and white people, men and women, than we are in upholding any differences. There are no differences them.

-The music industry has changed a lot since 2 Tone in the 1980s. Do you think things like digital music are for better or worse?
I think they're better. For a musician, it's great. You can bat MP3s around, record for next to nothing. You don't have to go into some huge studio that costs an arm and a leg. If you do, then it's for post-production rather than recording.

So, it enables bands who don't have the backing of very large record companies, which is a lot of the bands around in our day, to continue making music.

-After such an illustrious career, has life on the road changed over the years?
[Laughing]Yeah! We have a more comfortable bus now!

-What can fans expect from your live shows?
They can expect music culled from the Too Much Pressure album, Celebrate The Bullet, our new album, and certainly the two new singles that we've had out. Other songs that interest us, too.

-Made In Britain is out next month, but what does the rest of the year hold for you?
We're gigging up until the end of the year. We're doing a festival, Skabour Festival. Next year, we'll be touring during March and we're lining up festivals for next year too.

-What final message would you give to anyone reading this?
Maybe The Selecter doesn't mean anything to somebody of this generation, but maybe the idea of 2 Tone and what we set out to do 30 years does have some meaning for them.

Look at it, I guess, in that way. I consider that the 2 Tone message is worth trying to spread, not just in this country but throughout the world. That's all we're trying to do. 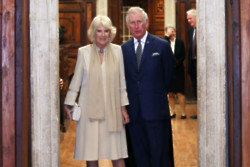