"I personally believe that the music industry is very progressive and open to embracing the issue of gender equality."

Hoping to deliver THE sound of the summer with her brand new track Remedy, Tiggi Hawke here discusses working with Cowen Brothers, women in the music industry and more!

For those who haven’t yet heard your style of music, how best would you describe yourself as an artist?

I’d put myself right in-between pop and electronic music which is the best of both worlds for me! I think my songs fluctuate between the two main genres but they’re always in that zone, there’s so much room to experiment and push the boundaries, I can’t imagine writing or singing anything else

Where do you draw influence and inspiration from when you’re writing, or performing?

I definitely take most of my inspiration from my own experiences or from people close to me, I find it’s much easier to access those emotions if you’ve felt them first hand, or if someone close to you has. That said, I think influence can come from anywhere! I have a very eclectic taste in music and I think it definitely influences my writing, although probably quite subtly. There are so many incredible artists to listen to, I love listening to music I’ve never heard before!

Can you tell us a little bit about how your collaboration with Cowens Brothers came about on Remedy?

It’s been such a pleasure to work with Cowens Brothers, they’re incredibly talented and so, so nice! How it came about is that they sent me the instrumental version of what is now Remedy and it had so much energy, I loved it! I was in LA at the time writing and I got to work with the amazing Polina so we wrote the topline together and just couldn’t wait to release it.

The studio is quite a mysterious place for people who aren’t in the music industry; can you tell us about a typical day in the studio? If indeed there are any typical days!

I’m really sorry, but I’m going to have to shatter that mysterious illusion, it’s much more regular than people think! I don’t think there’s ever a typical day though, every person works differently so some people have their routine and others just play it by ear (I’m the second option!). I feel very lucky to work with some amazingly talented producers and writers who are also very good friends so we always have fun writing together. Don’t get me wrong, there are plenty of cat video breaks too!

Moving forward, who would you love to collaborate with if you could choose anybody, and why?

I would LOVE to work with Ryan Tedder, that would genuinely be a dream come true for me. He seems like such a lovely person as well as being what I can only describe as a musical genius!

How do you like to wind down when you get some free time to relax?

I’m no good at it, but I really enjoy photography so when I have time I really like to take pictures (and hope for the best that they look alright!), stalk photographers on Instagram and ask them 100 questions about settings and equipment… Well, until they block me.

What’s your go-to song on the karaoke?

I’ll admit, it definitely depends on the amount of wine on offer but it will always include Led Zeppelin and Johnny Cash… Match made in musical heaven?!

What advice do you have for anybody who’s thinking about chasing a career in the music business?

Take a deep breath… and then go for it! The most honest piece of advice I ever received was from my mentor when I was 15, she told me to expect the craziest of all rollercoasters and she was 100% right. It’s not been an easy ride but, thanks to her, I never expected it to be and I’ve learnt to pick myself up quicker and better every time. I also have an amazing team around me to support me and I really would make sure you have people like that around you, it’s made all the difference in the world to me!

As the entertainment industry as a whole moves towards trying to bring equality for women, how would you say the music part of the industry is doing in that regard?

I think it’s happening but as with any major change or shift in mentality, it’s not an overnight process. The awareness of the situation has definitely helped and I personally believe that the music industry is very progressive and open to embracing the issue of gender equality. That’s a sweeping statement, but despite a few issues personally I’ve found being a woman in music to be very empowering.

Finally, what’s next for you in the coming months?

Some brand new music! I’m so excited to release some new singles before the end of the year and to gig as much as I can. I’m just incredibly grateful for everyone’s support and can’t wait for the next release! 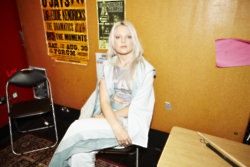