23 Most Beautiful Castles in Europe

Medieval, Gothic, Renaissance and Baroque are just some of the stunning architectural styles adopted to build, restore and refurbish these castles. Here are 23 of our favourite fortresses in Europe

Medieval, Gothic, Renaissance and Baroque are just some of the stunning architectural styles adopted to build, restore and refurbish these castles. Here are 23 of our favourite fortresses in Europe. 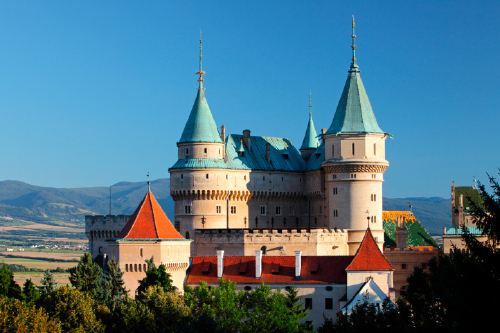 One of the oldest and most distinguished of Slovakia’s strongholds; Bojnice is a stunning 12th century medieval castle boasting original Gothic and Renaissance foundations. The castle stands on a travertine hill above the town, surrounded by an array of beautiful water features and greenery. Just the picturesque setting and effervescent colours of Bojnice Castle are enough to lure tourists to the town’s most prized possession. 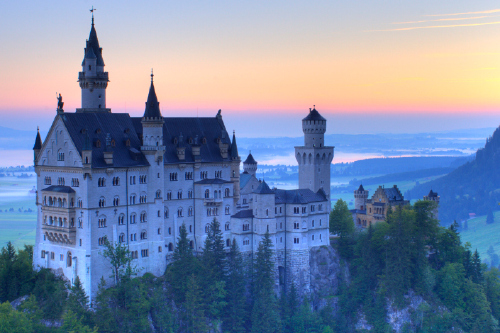 A castle of fairytales, there is no other stronghold in Europe that can match the sheer beauty of the 19th century Neuschwanstein. Set on a rugged hill above the village of Hohenschwangau, in southwest Bavaria, Germany, this fort has tall turrets and towers you would expect from the perfect storybook castle. The castles lavish interiors were inspired by Wagner’s operas and most rooms that are accessible to visitors still carry a certain charm as well as breathtaking views - it’s no wonder then, that Neuschwanstein Castle is one of the most visited landmarks in Germany and one of the most popular tourist destinations in Europe. 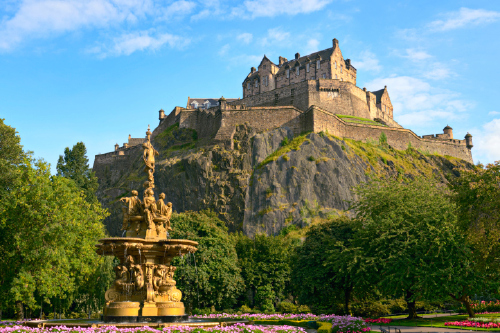 Possibly the most iconic of all of Scotland’s tourist attractions, Edinburgh castle takes a dominant position atop the volcanic Castle Rock, overlooking Edinburgh and bringing real culture, heritage and beauty to the Scottish city’s skyline. It is a place that has truly played a vital role in history where battles have been fought, royalty have lived, and the site even served as a military base and army headquarters in the 1600s. The magnificence of the castle is something that all Scottish people should stand proud of and one that visitors should aim to explore. 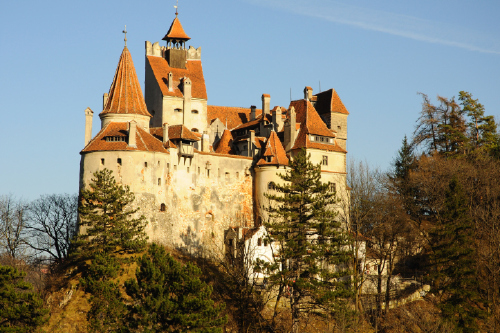 For anyone fascinated by the legend of Count Dracula, Bran Castle is a must-visit. Located on the edge of Bran Pass in the vicinity of BraÅov, this fortress is a national treasure and one of Romania’s most famous landmarks. It’s no surprise the castle has been voted top tourist attraction in Romania many a time, as its eerie surroundings and supernatural tales lure visitors in their thousands. 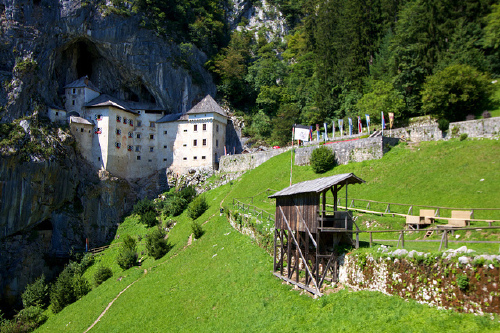 Its prime position on one of the most beautiful wonders of human history makes Predjama Castle a breathtaking place to visit. The Renaissance castle is erected within a cave mouth in the historical region of Inner Carniola, in south-central Slovenia. Perched high up the vertical cliff, the castle overlooks the idyllic village of Predjama, situated around 11km from Postojna Cave. 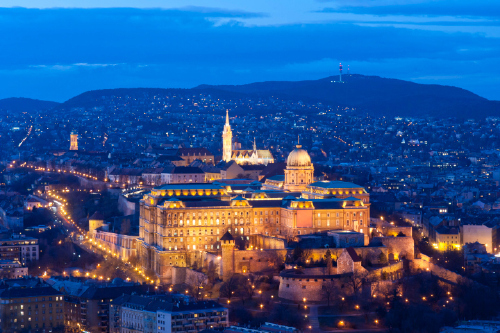 Rising above the Danube River on the hills where Budapest was founded, this historical complex of castle and palace takes prominent position in the Hungarian capital. The castle was first completed in 1265 and is the complex of the Hungarian kings in Budapest. The stunning site has been rebuilt and refurbished over the years as a result of a terrible fir in World War II. Today the interiors and exterior designs are a mix of medieval and modern, making for a remarkable building. 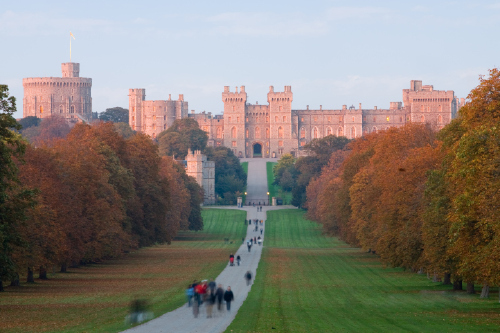 It’s the oldest and largest inhabited castle in the world and the official residence of Her Majesty The Queen in England, yet Windsor Castle is a welcoming site for visitors. Dating back to the 11th century, the English castle boasts some of the most awe-inspiring Victorian, Georgian and Gothic architecture, sprawled across a lush landscape in the beautiful county of Berkshire. 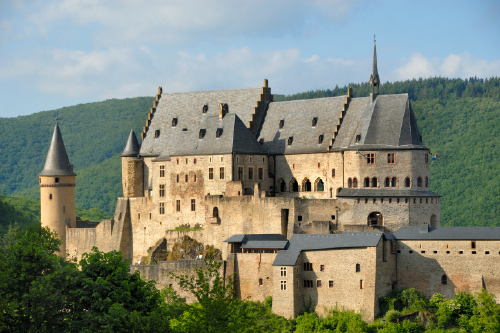 Visually the closest real castle to that of Disney, Vianden is a captivating fortress and one of the largest fortified castles west of the Rhine. Built in the Romanesque style from the 11th to 14th centuries, Vianden Castle has origins that date back to the 10th century, yet even today; the castle provides majestic views of the river and across the valley in Vianden, Luxembourg. 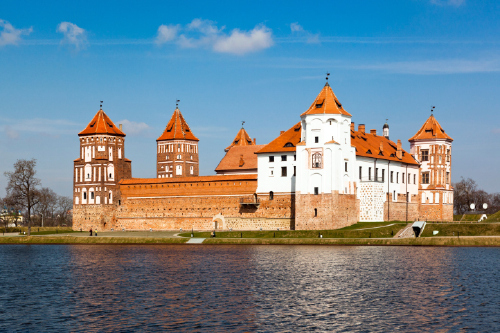 The Mir Castle Complex is said to have suffered a turbulent history, after being abandoned for nearly a century during the Napoleonic period and suffering much damage as a result of negligence. However, today, the fortress stands tall and proud as a UNESCO World Heritage site in the town of Mir, Belarus. The castle was restored at the end of the 19th century, still holding on to elements of Renaissance and Baroque style with a number of new stunning editions like the beautiful surrounding park and waterway. 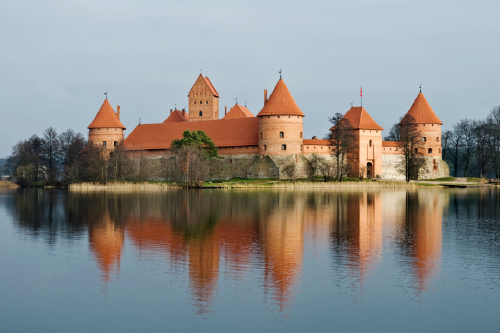 A castle turned museum with much historical significance, Trakai Island Castle is located on an island in Lake GalvÄ, Lithuania. The castle is now a famous museum, which tells the story of the area through archaeological finds. The museum itself is actually situated in two castles, this one on an island and the other on shore. The beautiful site is around 20 km from Lithuania’s capital city Vilnius, making for a great day trip for visitors. 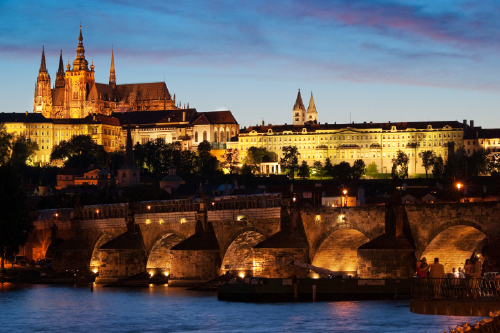 Home to the Czech Crown Jewels, Prague Castle is a symbolic monument of the Czech lands and one of the most important cultural institutions in the country. The Castle towers above the Prague skyline and can be appreciated from all around the city. It even has a place in the Guinness Book of World Records for being the largest coherent castle complex in the world, with an area of almost 70,000 square metres. An UNESCO World Heritage site, the castle complex consists of palaces and priestly buildings of diverse architectural styles, from Roman to Gothic designs. 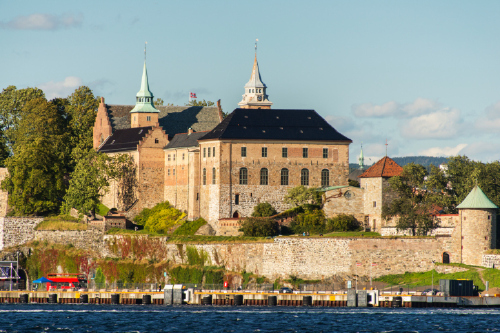 Akershus Castle is steeped in history, from being built as a medieval castle to protect the capital city of Oslo, to being used as the royal residence and even, at one point, housing the bad guys as a prison. Today, the castle is abundant with majestic halls, a beautiful church, the Royal Mausoleum and many magnificent reception rooms and banquet halls, used mainly by the Norwegian government. 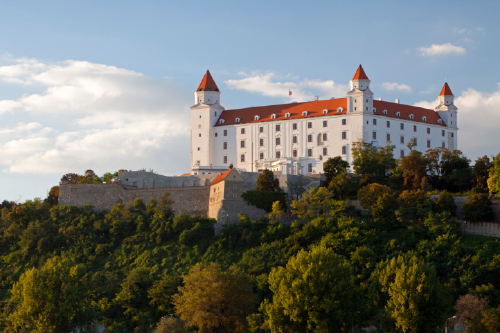 The picture-perfect image of a four-walled citadel, Bratislava Castle in Slovakia is a magnificent rectangular building with four corner towers, towering above the Slovak capital on a somewhat secluded rocky hill. The castle has housed the Slovak Parliament and collections of the Slovak National Museum, since the country’s independence from the Czech Republic in 1993. An extensive restoration project, which began on 2008, is currently underway at the castle, meaning visitors can’t get inside, but the castle’s exterior and views of the Danube are still accessible. 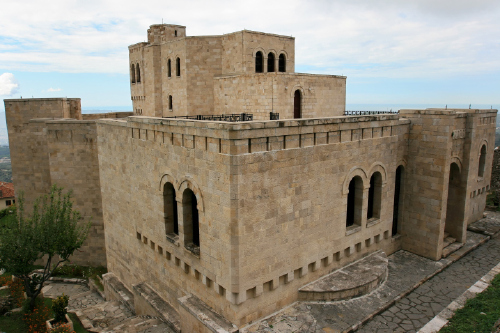 Located in the former capital of Albania, Kruja Castle is famously remembered as the centre of Skanderbeg's battle against the Ottoman Turks. Visitors can walk within the castlewalls where they will find some interesting artifacts such as coins, photos, and swords, all telling the story of how Skandeberg defended his country. 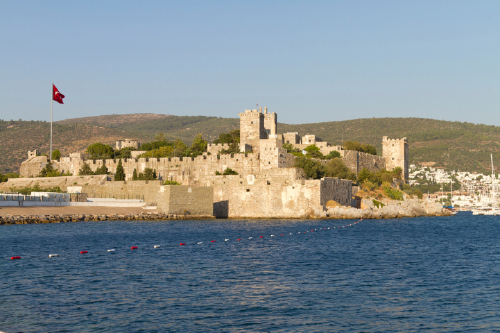 Built by the Knights Hospitaller in 1402 as the Castle of St. Peter or Petronium, Bodrum Castle floats on the beautiful waters of the Aegean Sea in south-west Turkey. The castle is home to the Museum of Underground Archeology and its beautiful towers stand tall above a quaint port town. Here, visitors can truly appreciate the mesmerizing shipwrecks of the Aegean Sea. 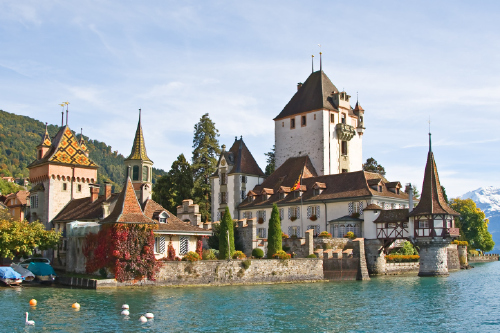 One of the continent’s most romantic castles in an even more romantic setting, Oberhofen in Switzerland is a real gem set on the shores of Lake Thun. The medieval keep and Lake Tower dates back to the early 13th century and currently houses a museum with rooms ranging from neo-Gothic styles, to Turkish smoking parlors and influences of both Renaissance and Baroque too. Today, the castle chapel can still be used for baptisms and marriages, and Oberhofen is definitely one of the most majestic buildings in the Alps. 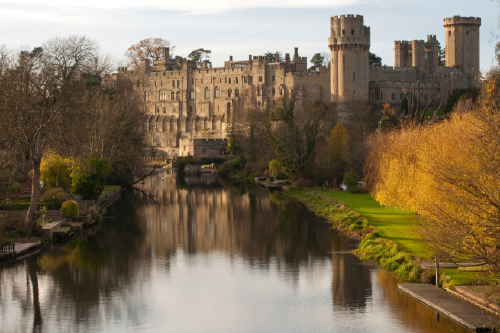 The ultimate English castle set against the backdrop of stunning scenery including picturesque greenery and the winding River Avon. Warwick Castle is a medieval stronghold developed from an original built by William the Conqueror in 1068. Grounded by history and legend, England's Warwick Castle provides visitors with a distinctive experience, embracing culture and heritage of the area, including having a Castle Dungeon of the Witches of Warwick; a jousting arena; and even a Merlin Dragon Tower. Its towering turrets and dramatic tourist constructions stay true to the spellbinding myths associated with the castle. 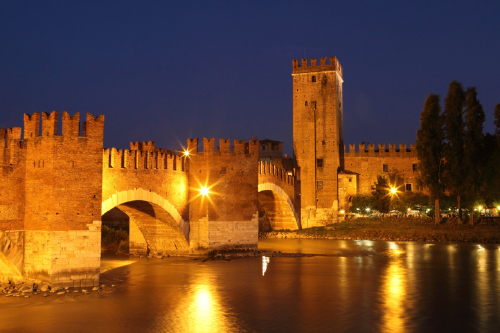 Standing on a probable location of a Roman fortress, Castelvecchio in Italy is the most important military construction of the Scaliger dynasty that ruled the city of Verona in the Middle Ages. Translating to ‘Old Castle’, the size of this castle is underwhelming compared to other son the list, however, what it lacks in size, it makes up for in impact and power. The compact magnitude and little decoration helps the one square compound built in red bricks, to really stand out as a prominent example of Gothic architecture. And if that’s not enough, the castle features seven towers and is home to the Castelvecchio Museum and the local officer's club. 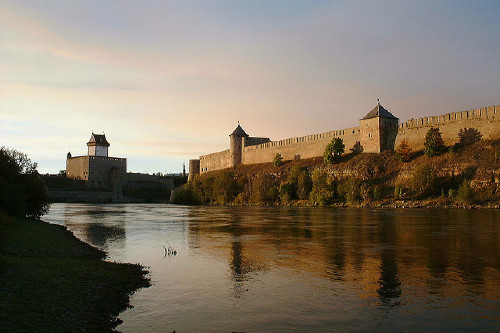 One of the oldest fortresses in Europe, Hermann Castle, founded in 1256 by the Danes, is the first stone castle to be built at the beginning of the 14th century. It’s one of the primary attractions of that region, located on the Estonian-Russian border along its far eastern tip, standing on the banks of the Narva River. Over the years the castle has been refurbished by the Swedish and Russians, as many have claimed ownership of the citadel from time to time. 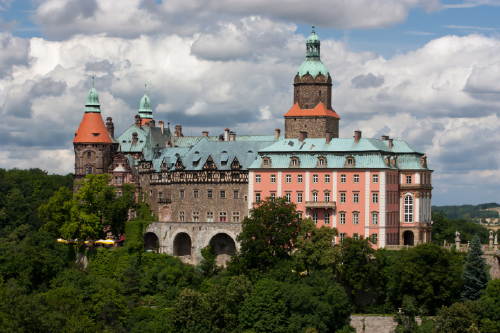 Also referred to as the ‘Pearl of Lower Silesia’, this 13th century castle in Poland is one of the areas most visited landmarks, as its picture perfect location attracts tourists from the world over. With much of its charming design and architecture being influenced by the late Middle Ages, Ksiaz is Silesia’s most magnificent fortresses with fascinating interior features. 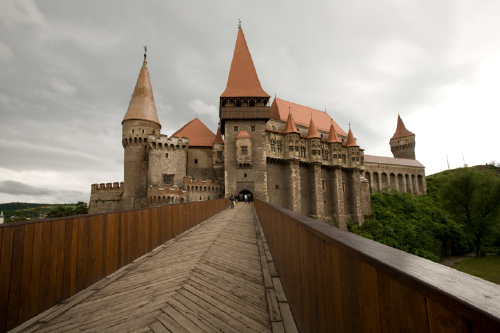 If you love gothic-renaissance architecture and especially unique features, then a visit to Hunyad Castle in Romania should be near the top end of your travel list. Constructed in the 14th century by King Charles I of Hungary, this castle has since been restored using the most authentic brick, and is open to the public for a wonder. 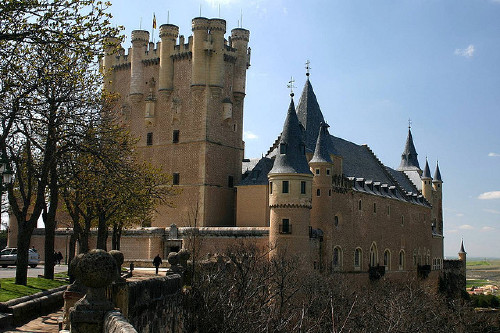 An impressive monument that has been nicely restored to the kind of greatness you would expect to find in such a fortress. Coca is one that is traditionally off the tourist routes, located in Segovia, Spain, but it is in fact one of the countries most important castles. Visitors who can find time to go and see Coca are in for a real treat as battlements and rooms are free to roam at leisure. More recently the castle has also been used as a school. 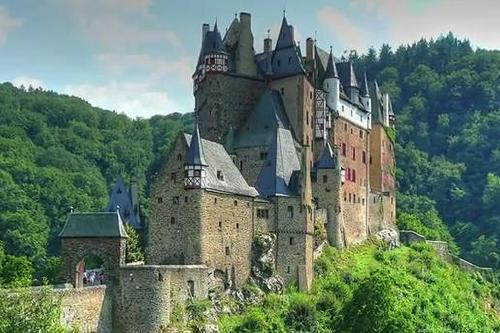 Burg Eltz, as it’s commonly known, is a medieval castle nestled in the hills above the Moselle River between Koblenz and Trier, Germany. There is much fascinating history that accompanies this charming castle, and visitors enthralled to hear about it would do well to visit in the autumn or winter time, to avoid crowds. This is also the best time to capture the best views of the impressive valleys surrounding the castle, and it’s endearing to know that nearly 34 generations of the same family have called Burg Eltz their home since the 12th century.

Did we miss any of you rfavourites off the list? Tell us in the comments below or tweet us @FemaleFirst_UK 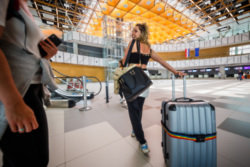 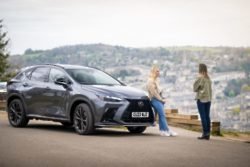