Showtime's Homeland is returning next year with its sixth season, and the brand new trailer for the series has been released.

Now following ex-CIA agent Carrie Mathison (Claire Danes), the show moves to New York City, setting the events of the show against the backdrop of a fictional US Presidential election. Topical, right?

Returning characters Saul Berenson (Mandy Patinkin) and Dar Ardal (F. Murray Abraham) can be spotted in the new selection of visuals, with the trailer also confirming the show will be returning to screens in America on January 15. 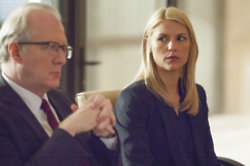