Atkins diet found to be bad for the heart

A low-carb diet, like the popular Atkins, may be bad for the heart, according to a new study.

Doctors have found that a diet of this variety was linked with increased cholesterol levels.

The research conducted in Sweden over 25 years tracked the health of 140,000 people in the north of the country after it was seen that cardiovascular diease there in the 1970s was particularly high.

From 2004, Sweden saw a surge in the popularity of highfat/low carb diets.

It is thought a quarter of Swedes have since at least partly adopted the trend and there were even reports of stores running out of butter, due to extra demand.

The study also found dieting of all kinds had no impact on obesity, which steadily increased over the 25 years.

Professor Ingegerd Johansson, from the University of Umea, who led the research published in Nutrition Journal, said: "While low carbohydrate/high fat diets may help short-term weight loss, these results of this Swedish study demonstrate that long-term weight loss is not maintained and that this diet increases blood cholesterol, which has a major impact on risk of cardiovascular disease." 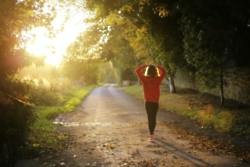