Ex-Sugababe Mutya Buena is reportedly recovering from bum surgery according to Look magazine.

The singer and Celebrity Big Brother star is said to have spent £6,000 on the operation to boost her bum after she lost two stone slipping from a size 14 to a size 10. The procedure involves inserting silicone implants into the bum.

A source told Look: "I think Mutya has been unhappy for a long time. She was upset her bum was so flat after loosing weight, so she tried bum-hoisting tights and cheek enhancing knickers, but in the end she just wanted permanent surgery."

The source added: "The surgery hurt like hell, but she says it'll be worth it!"

Surgery to give you a bigger bum seems a bit extreme to us but we're glad Mutya's embracing the curvy look! 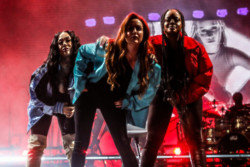