Jenni Falconer talks to us about running the London Marathon

Jenni Falconer has graced our screens for more than 10 years, after recently giving birth she's about to don her running shoes for the London Marathon. She tells us how training is going

Tell us what you're doing with the London Marathon and Acuvue.

There's not long to go till the marathon and it's my third time running it this year, so I decided to join up with Acuvue who are one of the official sponsors this year, and they are trying to make the event, The Spectale free Spectacle this year. They're just encouraging people consider trying contact lenses. You know, you can do exercise so much easier if you use lenses instead of classes or instead of being slightly blind like I have in the past. I wear contact lenses anyway, daily disposables, so it was appropriate for me to team up with them and to help promote the marathon.

How do you think wearing contact lenses benefits you when working out?

Do you know what it is, I could run without glasses or contacts, I could easily run without wearing anything, but I don't get to see everything as 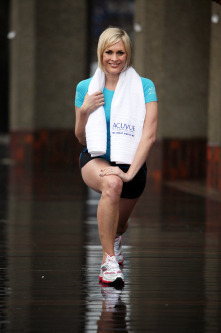 sharply as I would if I wore my lenses. On the marathon day, it's so busy and it's so crazy, there's big crowds and there are bands and everything else, it means that everything becomes a bit of a blur and slightly overwhelming so just by wearing lenses everything is suddenly clearer, you can focus a bit better because you can actually see things ahead.

Also, if you're wearing glasses, I've worn them myself, even if it's running from a shop to a shop, they bounce. And it's not practical is it? Lenses are just better, I know a lot of people are too scared to have the laser surgery, so lenses are a really good option.

Like you said, you're taking part in the marathon. How's training going?

It's going ok, I started training in January. I would have liked to have started earlier but I couldn't because I'd just had a baby in September. It's much harder this time round because I've effectively had to start getting my fitness back before I could start training. Every week I seem to be getting a bit better, so by the time the marathon comes along I'll hopefully be right as rain.

So, what sort of things are you doing for training?

Predominantly running, I have a fitness programme and I train with a lady called Karen and she's been helping me run for a while in terms of giving me advice on which programme to do. She's just written out a training programme for me which is good for someone who has just had a baby and is getting back in shape. It's not about how far I run, I try and do time periods of running. So this weekend, I'm going to try and run for two-and-a-half hours, because when you're building up to the marathon it's about running for as long as possible in the training period as opposed to anything else because you've got to get as much time on your feet.

What's the worst thing about the training?

The training is going alright, it's just trying to find the time. When you've got a baby I just can't say, 'Oh, I'm off out for a run', so that's the hardest thing. Although, I have invested in a pram that I can run with, so that's helpful.

So she's been out on runs with you?

Yes, she must thing that it's so normal to have a mum that pushes her at a fast speed everywhere you go. She'll get a shock when the marathon is over and things slow down a little bit.

Do you train any better when you're with other people? 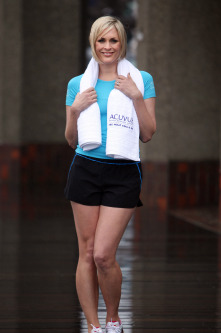 I do, basically because I train whenever I can, I train better during the day because by the end of the day I'm just too tired and I need my rest, so if I can get up early in the morning that will be quite good. I actually love it when it's sunny outside because of the fresh air, you don't get cold and you can get a bit of a tan. The lenses aswell, they've got really good UV protection, so that comes in quite handy as well. I like it when it's nice weather, which it has been now for a while.

What are your training must-haves?

Absolutely have a decent pair of trainers, there's no point in trying to do the marathon in a pair of converse you've got to buy the most suitable trainers because you don't want to sustain injuries. If you get injured your running will be cut short and you might not even make it to the marathon day. Trainers are possibly the most important thing you can have.

If you're a girl, probably a good sports bra because that's another thing that you don't want to damage, so you've got to invest in something that really will support you.

Also, make sure that you have the right kit. You don't want clothing that on the day will rub, chaff or even cut you. So make sure that what you're running in on Marathon day, works for you in advance.

And Vaseline your feet. I know this sounds really strange, but I've put Vaseline on my feet for both marathons that I've done and I've never had a blister.

Will you be doing any more marathons this year?

I've been asked to do a few, but I've said that I'm going to get this one of the way first before I consider any more because it's quite a lot of effort to run 26 miles. I think to think beyond that is foolish.

John Bishop took part in his Week of Hell recently for Sport Relief, would you ever do something like this?

It's absolutely amazing, I'm amazed that he did it. I have so much respect for him, I saw him just before he done it and he said that he hadn't been training, I don't believe him, he done so well. He done such a great thing for Sport Relief. I'm not sure if I'm quite up to that challenge, although it is always nice to have a challenge.

You've ran races before and have always kept in shape - how did you manage to keep fit whilst pregnant?

Just because you're pregnant, it doesn't mean that you can't do exercise. A lot of people think that when you're pregnant, all you should do is sit on a sofa with your feet up and eat cakes, now you can do that but you should also do some exericse because, I don't know if it's linked, but I'm quite lucky in that I had a very short, fast labour, although it did hurt. And I think that might be linked to the fact that I did exercise throughout, I was running up until about 5/6 months of my pregnancy and then I couldn't and didn't want to run anymore. So, I was doing the cross-trainer, going for lots of walks and I did light weight sessions and training sessions right up until the week before I gave birth. I did try to keep stuff up because obviously you don't have to sit back and do nothing although I did do a fair amount of that too.

How are you finding juggling your career with the baby?

It's all ok, I'm really lucky in that I don't have to put my daughter into nursery or send her to childcare yet because my work juggles quite nicely alongside being a mum. My husband James and I seem to be mastering the art of one of us looks after the baby and the other one goes to work. For weeks that we are both working, we're very lucky that my mum is very keen to be a hands-on Grandmother. She comes down from Glasgow every now-and-then to help. Maybe at some point we'll have to look into more frequent childcare but at the moment we seem to be coping okay.

What's coming up next for you then?

I do the lottery and I'm working continuously on that, I do bits for This Morning and I also have a series that I'm about to start filming called Fantasy Home. This is the week before the Marathon, so I won't be at Home which means that I possibly won't be able to run.

Here's what to eat and drink when taking antibiotics